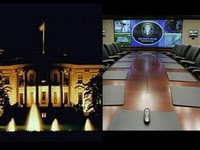 chertoff has ‘a gut feeling’ about more terror

from abc: Senior U.S. intelligence officials tell ABC News new intelligence suggests a small al Qaeda cell is on its way to the United States, or may already be here.

The White House has convened an urgent multi-agency meeting for Thursday afternoon to deal with the new threat.

Top intelligence and law enforcement officials have been told to assemble in the Situation Room to report on: what steps can be taken to minimize or counter the threat, and what steps are being taken to harden security for government buildings and personnel.

Homeland Security Secretary Michael Chertoff told the Chicago Tribune editorial board on Tuesday he had "a gut feeling" that an attack was coming.

"We do worry about whether they are rebuilding their capabilities," Chertoff said. "We strike at them; we degrade them; but they rebuild."

(watch the videos of chertoff fearmongering in chicago)

what color code is a 'gut feeling'?

white house: no specific terror threat against US
from reuters: The Bush administration said on Wednesday there was no specific, credible terrorism threat against the United States and denied that an emergency meeting had been called.

ABC News reported on Tuesday that the White House had called an urgent multi-agency session for Thursday to discuss a potential new al Qaeda threat on U.S. soil.

White House officials said it was a regularly scheduled meeting and not attended by the most senior national security officials.

"There continues to be no credible, specific intelligence to suggest that there is an imminent threat to the homeland," White House spokesman Tony Fratto said.

"There is no emergency meeting," he said.