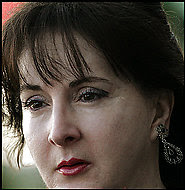 from raw story: Following the judge's lifting of a gag order, "DC Madam" Deborah Jeane Palfrey promised to release her phone records to selected sources. However, those records have now been posted in full to her website.

Because the website has suffered from a series of periodic outages since the records were posted Monday evening, the following message from Palfrey is being reproduced here:

"I have reason to believe the disk – containing a full set of the telephone records for the 13 year operational history of 'Pamela Martin & Associates' – already has been pirated. Despite our very best intentions to maintain control of the information, our efforts seemingly have been for naught. I am concerned about manipulation of the database with false and misleading information. Even though such falsifications can be refuted in time by comparing an altered copy with the original, my attorney, Mr. Sibley and I fear that in the intervening time period, considerable damage can and will be done to the reputations of individual and entities with no connection to the business. Additionally, the overall validity of the records’ contents will be diminished when one false accusation after another begins to manifest. Therefore, to thwart any possible distorted version and to ensure the integrity of the information, the records – in their entirety – are available for downloading."

The following links to Palfrey's records may only work periodically due to site outages.

It's an alignment born from coincidental interests: Flynt wants to expose Washington hypocrites, and Palfrey has a long list of people who probably qualify. Sen. David Vitter (R-La.) became their first victim when a Flynt investigator linked his name and honorable title to an old telephone number on Palfrey's client list.

Vitter's exposure on Tuesday should put any other conservative Republican with sexy skeletons on notice: Start practicing your mea culpa.