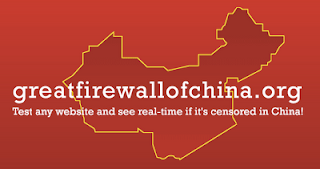 from latimes: For a couple of precious hours Monday, the Chinese government's Web censoring system, popularly known as the Great Firewall, was lifted. Suddenly, Internet users had access to websites that had been banned for months, including YouTube, Facebook and Twitter.

Cautious excitement spread on some social-networking platforms that authorities were expanding Internet freedoms. But by the time most Chinese woke up the restrictions were back. Error messages once again flashed across computer screens for sites blocked by the nation's censorship filter.

"It seemed just like a dream," said Michael Anti, a social critic and one of hundreds who tweeted about the development on Twitter.

In many respects, it was.

Savvy computer users have found ways to scale the Great Firewall. But the vast majority of China's netizens face limits on their Internet wanderings, and that's likely to continue.

"The government isn't showing any signs of giving up on censorship," said Jonathan Zittrain, co-founder of Harvard Law School's Berkman Center for Internet and Society. "If anything, they're innovating and exploring other avenues."