another fascinating intersection of art imitating life imitating politics... with an incongruous title like 'clockwork orange,' where the 2 words don't seem to fit together, the 'chinese democracy' meme begs the question: who's trying to force what on whom? even thought the record is warmed-over industro-rock way past its prime, it plants the seed of predictive programming: we're not spreading democracy, we're all being imposed upon with the chinese model of a new financial world order.

guns n' roses' new album is up against a chinese wall

from wsj: The heavy metal band Guns N' Roses is roiling China's music scene. But sex, drugs and rock 'n' roll aren't the issue. The trouble is the name of the group's latest album: "Chinese Democracy." It has taken 17 years for the band to produce a new studio record. Now, even before it goes on sale Sunday, in a release heralded by its producers as a "historic moment in rock ' n' roll," the disc is getting the thumbs down from Chinese authorities. It's also causing anxiety among GN'R's legion of loyal fans here, who aren't sure they like what lead singer W. Axl Rose is trying to say about their country. China's government-owned music-importing monopoly has signaled that local record distributors shouldn't bother ordering the GN'R production. Anything with "democracy" in the name is "not going to work," said an official at the China National Publications Import & Export (Group) Corp., part of the Ministry of Culture. 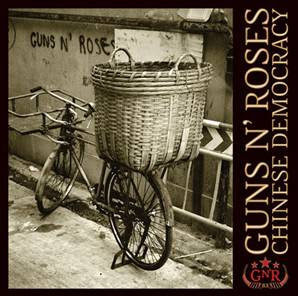 from the australian: A newspaper published by China's ruling Communist Party has blasted the latest Guns N' Roses album as an attack on the nation. China's internet censors appeared to be trying to block fans from accessing websites related to the album, which is titled Chinese Democracy. Delayed since recording began in 1994, Chinese Democracy was released in the US on Sunday. It is unlikely to be sold legally in China, where censors maintain tight control over films, music and publications. In an article published on Monday headlined "American band releases album venomously attacking China", the Global Times said Chinese internet users had described the album as part of a plot by some in the West to "grasp and control the world using democracy as a pawn". The Guns N' Roses record "turns its spearpoint on China", the article said.