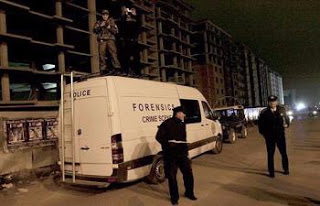 from paul joseph watons: German intelligence agents have been caught staging a false flag terror attack against an EU building in Kosovo, apparently in an attempt to create a pretext for EU police to be deployed in Kosovo after government leaders rejected the UN-mandated proposal. “Germany declined to comment on on Saturday on reports that three Germans arrested on suspicion of throwing explosives at an EU office in Kosovo were intelligence officers,” reports Reuters. “The explosive charge was thrown on Nov. 14 at the International Civilian Office (ICO), the office of EU Special Representative Pieter Feith, who oversees Kosovo’s governance.” A police source in Kosovo told Reuters: “They are members of the BND”, but gave no further details. German news outlet Der Spiegel named the men as BND intelligence officers. Most reports claimed that the officers had thrown dynamite at the building, while others reported that a bomb was placed near the building.

cleveland installs downtown surveillance cameras
from wkyc: The city is installing 13 new surveillance cameras downtown to send a safety message. Four of the cameras are operating now and nine more will be working by next weekend in time for the city's annual holiday display on Public Square. The city will monitor and control the cameras and record images around the clock. Public Safety Director Martin Flask says the cameras are mounted on poles and have blue strobe lights attached to them so people can see them and feel safe. The wireless system operating the cameras will store images for a month.

from arizona republic: Officer David Callister parks his patrol car under a shady interstate overpass, angling his cameras to target a flurry of passing traffic. Then he waits. Infrared units mounted to the front of Callister's vehicle scan the license plates of a Casa Grande firefighter, an Ohio State football fan and everyone else who drives past as he hunts for stolen vehicles. Every plate is photographed, time-stamped, labeled on a GPS map and automatically logged into an Arizona Department of Public Safety database. An electronic voice alerts Callister to stolen vehicles within seconds after they pass, giving him the ability to make quick arrests.

US rolls out 'vicinity rfid' to check id's in moving vehicles
from the register: RFID technology that allows the remote identification of travellers in moving vehicles is being rolled out at US land border crossings this month. Crossing points with Canada at Blaine, and with Mexico at Nogales, came online last week, with Buffalo, Detroit and San Ysidro to follow, and a total of 39 planned. The system uses the US PASSport (People, Access Security Service) card, which is intended to operate within the Western Hemisphere Travel Initiative (WHTI) for US citizens entering the US via land and sea ports. Using "Vicinity RFID" it can read the cards from a healthy skimming distance of 20-30 feet, but according to the Department of Homeland Security this isn't a problem. The RFID chip on the card doesn't contain any personal information, only a unique identification number, and skimmers wouldn't have access to the data the number matches up with.

uk social services 'set up cctv camera in couple's bedroom'
from telegraph: Council staff are said to have spied on the young parents at night as part of a plan to see if they were fit to look after their baby, who was sleeping in another room. The mother and father were forced to cite the Human Rights Act, which protects the right to a private life, before the social services team backed down and agreed to switch off the surveillance camera while they were in bed together. The case is highlighted in a new dossier of human rights abuses carried out against vulnerable and elderly adults in nursing homes and hospitals across Britain. It comes just days after the Government admitted town halls have gone too far in using anti-terror laws to snoop on members of the public.

military examines role in domestic defense
from ap: Defense Secretary Robert Gates on Monday ordered his top department leaders to conduct a broad review to determine whether the military, National Guard and Reserve can adequately deal with domestic disasters and whether they have the training and equipment to defend the homeland. The 41-page memo signaled an acknowledgment that the military must better recognize the critical role of the National Guard and Reserves in homeland defense, but stopped short of requiring many specific policy changes. His memo comes in the wake of a stinging 400-page independent commission report that concluded the military isn't ready for a catastrophic attack on the country, and that National Guard forces don't have the equipment or training they need for the job.

US army to equip national guard unit with future combat system aerial robots
from usarmy: The Army's commitment to equipping its total force with Future Combat System (FCS) capabilities continues as the first Army National Guard unit - the 56th Stryker Brigade Combat Team of the Pennsylvania National Guard begins training next month with the FCS-developed gasoline-powered Micro Air Vehicle (gMAV) prior to the unit's deployment to Iraq in January.

US govt taps facebook, google & mtv to 'fight terrorism'
from afp: The US State Department announced plans on Monday to promote online youth groups as a new and powerful way to fight crime, political oppression and terrorism. Drawing inspiration from a movement against FARC rebels in Colombia, the State Department is joining forces with Facebook, Google, MTV, Howcast and others in New York City next week to get the "ball rolling." It said 17 groups from South Africa, Britain and the Middle East which have an online presence like the "Million Voices Against the FARC" will attend a conference at Columbia University Law School from December 3-5.

robot may be more 'humane' soldier
from iht: In the heat of battle, their minds clouded by fear, anger or vengefulness, even the best-trained soldiers can act in ways that violate the Geneva Conventions or battlefield rules of engagement. Now some researchers suggest that robots could do better. "My research hypothesis is that intelligent robots can behave more ethically in the battlefield than humans currently can," said Ronald Arkin, a computer scientist at Georgia Tech, who is designing software for battlefield robots under contract with the U.S. Army. "That's the case I make."

from discover magazine: The military’s most farseeing agency, the Defense Advanced Research Projects Agency, required the services of Eleventh Hour’s Jacob Hood in last night’s episode to figure who violently killed some test-chimps and a veterinarian in the agency’s super soldier program. It seems a mad scientist had found some way to increase the size of a human amygdala, which led the soldier to have extreme, and unthinking, fight-or-flight reactions. Whenever someone approached this super soldier in a threatening way, he reacted with extreme prejudice. Naturally, the mad scientist wasn’t supposed to be testing on people, which is why by the end of the show he was off to prison. But DARPA is pretty serious about improving the, ahem, human component of soldiering. After decades of focusing on machines (like unmanned flying drones, GPS, and Internet), DARPA decided toward the end of the 1990s to focus on improving the actual biology of the soldiers. Contrary to the show, the goal is not extremely obedient killers. The modern military is focused on small teams functioning independently, far from base and reinforcements of any kind. To succeed in this kind of environment, they want to actually increase the ability of soldiers to think creatively, to stay awake longer, and to be physically active longer without becoming tired.