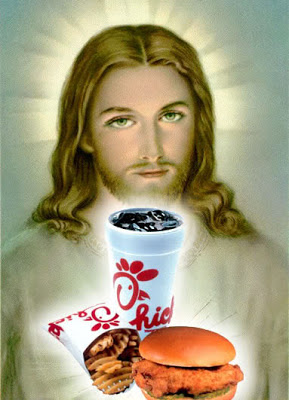 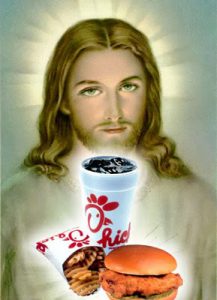 from raw story: The American Family Association, a conservative Christian group, is urging people to show appreciation for the fast food chain Chick-fil-A by purchasing their products during the week of April 25-30. The so-called "buycott" is in response to an "attack by homosexual activists against the Christian-owned Chick-fil-A company," the group said.

The American Family Association also said it was pleased the fast food chain plays Christian music in its restaurants and closes all its locations on Sunday. Chick-fil-A's corporate purpose states that the business exists to "glorify God by being a faithful steward of all that is entrusted to us" and "have a positive influence on all who come in contact with Chick-fil-A."

Chick-fil-A, which has 1,550 locations in 39 states, has been accused of having deep financial ties to nationwide organizations that oppose marriage equality and lesbian, gay, bisexual, and transgender (LGBT) rights. According to an investigation by the progressive blog EqualityMatters, the restaurant chain's charitable division has provided more than $1.1 million to anti-LGBT organizations, including the Alliance Defense Fund and Family Research Council.

Because of the fast food chain's donations, students at Indiana University South Bend have pushed to have Chick-fil-A products removed from their campus. In addition, LGBT groups have initiated boycotts against the fast food chain.

The American Family Association noted that LGBT rights advocates have mockingly referred to Chick-fil-A's products as "Jesus chicken." The president of Chick-fil-A has insisted that the company is not anti-gay, but is merely operating a business according to Biblical principles and supporting healthy families.

"We have no agenda against anyone," Dan Cathy, President and COO of the fast food chain, said in a statement from January. "At the heart and soul of our company, we are a family business that serves and values all people regardless of their beliefs or opinions."

This story could've been posted at Holy Hexes...