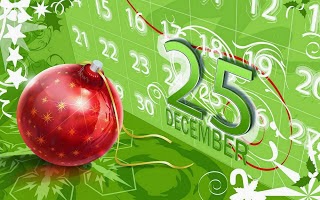 Bible Archeology provides interesting discussion, whether Christmas based on pagan holiday?  Blog entry also provides insight into twelve days of Christmas.   A commonly held belief, scholars promote idea many pagan holidays, were included, under rubric of Christianity in order to win converts.   "There are those who claim the date for Christmas was originally set to coincide with a pagan holiday. The Romans celebrated the Saturnalia festival in late December of each year. In 274 A.D. emperor Aurelian set the feast date for the birth of Sol Invictus, the Unconquered Sun, for December 25th. Many have advanced the claims the early Christian church set the date of Christ's birth to coincide with this festival to attract the pagan worshipers."

"Early church leaders believed the birth and death of Jesus were tied together. Jesus came to earth to die for our sins and make it possible for us to achieve what it was impossible to achieve by the law. For this reason the conception and death of Jesus were believed to be so related that they happened on the same day of the year.
Using the Hebrew calendar it was determined Jesus had died on the 14th of Nisan, which is our modern day March 25th. Early Church leaders calculated that if Jesus was conceived on March 25th, and born nine months later, it meant Jesus was born on December 25th."

"In the eastern church they used the Greek calendar which placed the date of the crucifixion as April 6th. The eastern church held the same belief and used the same calculations as the western church and placed the date of Jesus' birth nine months later, or January 6th. These two dates were used for centuries as the dates for Christmas. The time between these two dates came to be known as the twelve days of Christmas. It seems, based on the evidence and not the work of modern day fiction writers, the date for Christmas was set based on Good Friday and Easter, not a pagan holiday."