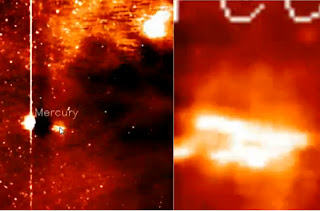 Is it a cloaked spaceship (UFO, right frame) near planet Mercury or imaging artifacts? The Stereo spacecraft captured imaging of Mercury, on Dec. 1st, and what appears to be a large object nearby as a Coronal Mass Ejection washes over planet. "According to Russ Howard, head scientist of the NRL group [United States Naval Research Laboratory], and Nathan Rich, lead ground systems engineer, it is simply an artifact left over from the way raw HI-1 telescope data gets processed. Rather than a UFO mothership parked near Mercury, the bright spot is "where the planet was on the previous day," Rich told Life's Little Mysteries," as reported by Science on MSNBC.com. Wouldn't you think the artifact would resemble the shape of the planet? It's interesting video!