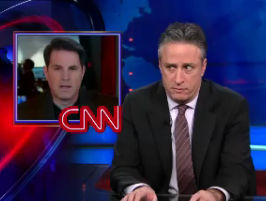 cnn’s rick sanchez out after suggesting jews run the media

from politico: Rick Sanchez lost his job at CNN on Friday, just 24 hours after giving a satellite radio interview in which he called Jon Stewart a “bigot” and suggested that Jews run CNN and other media companies.

"Rick Sanchez is no longer with the company," CNN said in a statement. "We thank Rick for his years of service and we wish him well." CNN said it would broadcast CNN Newsroom from 3-5pm for the foreseeable future.

The CNN host has been the frequent butt of "Daily Show" jokes, which may have contributed to his ill-considered comments yesterday on Pete Dominick’s satellite radio show. First, Sanchez called Jon Stewart a “bigot,” though he walked the comments back a bit later.

Dominick: How is he a bigot?
Sanchez: I think he looks at the world through, his mom, who was a school teacher, and his dad, who was a physicist or something like that. Great, I’m so happy that he grew up in a suburban middle class New Jersey home with everything you could ever imagine.
Dominick: What group is he bigoted towards?
Sanchez: Everybody else who’s not like him. Look at his show, I mean, what does he surround himself with?

Then, he suggested that CNN is run by Jews.

CNN fired Octavia Nasr this summer for a tweet expressing respect for a Lebanese cleric tied to Hezbollah who had died.