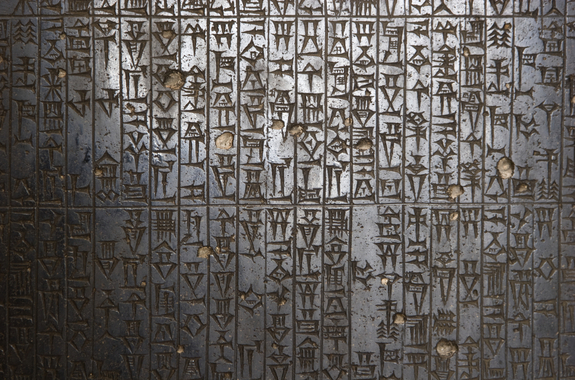 from livescience.com: The Code of Hammurabi refers to a set of rules or laws enacted by the Babylonian King Hammurabi (reign 1792-1750 B.C.). The code governed the people living in his fast-growing empire. By the time of Hammurabi's death, his empire included much of modern-day Iraq, extending up from the Persian Gulf along the Tigris and Euphrates rivers. There are as many as 300 laws that discuss a wide range of subjects, including homicide, assault, divorce, debt, adoption, tradesman’s fees, agricultural practices, and even disputes regarding the brewing of beer.

The code is best known from a stele made of black diorite, more than seven feet (2.25 meters) tall, that is now in the Louvre Museum in Paris. The stele was found at the site of Susa, in modern-day Iran, by excavators who were led by Jacques de Morgan at the beginning of the 20th century. Scholars believe that it was brought to Susa in the 12th century B.C. by an Elamite ruler who subsequently erased a portion of it in preparation for creating an inscription of his own.

There are as many as 300 laws that discuss a wide range of subjects, including homicide, assault, divorce, debt, adoption, tradesman’s fees, agricultural practices, and even disputes regarding the brewing of beer.


Originally, Hammurabi would have displayed the stele at the site of Sippar, in modern-day Iraq, likely in a prominent temple. In ancient times, Sippar was the home of the sun god Shamash, and the top of the stele shows an image of Hammurabi before this god, with rays coming from Shamash’s shoulders. Scholars widely believe that other, now lost, steles would have existed in other cities in Babylon that were controlled by Hammurabi.

The term “Code” of Hammurabi is a modern one, so named after the 19th-century “Code Napoleon.” Scholars today debate the meaning behind the stele that is now in the Louvre and whether the rules Hammurabi enacted truly represent a full law code.

Regardless of the answers to these questions, Hammurabi himself states in the prologue to his laws that his right to make them was one given by the gods themselves.

“Anu and Enlil ordained Hammurabi, a devout prince who fears the gods, to demonstrate justice within the land, to destroy evil and wickedness, to stop the mighty exploiting the weak, to rise like Shamash over the mass of humanity, illuminating the land …” (Translation from "The New Complete Code of Hammurabi," by H. Dieter Viel, University Press of America, 2012)

A harsh and unequal law

Each law consists of a potential case followed by a prescribed verdict. The verdicts could be very harsh indeed, and Columbia University professor Marc van de Mieroop notes in his book "King Hammurabi of Babylon" (Blackwell Publishing, 2005) that the death penalty is listed as punishment no fewer than 30 times. It was the punishment given even for “the theft of temple or palace property or when a runaway slave is given refuge,” van de Mieroop writes.

Furthermore, the punishments ordered were by no means uniform but rather depended on the social status of the accused and the accuser. The punishments were only “eye for an eye” if the two individuals involved were socially equal.

For instance, van de Mieroop notes that if a member of the elite blinded a commoner or broke the commoner's bone, that elite person had to pay one pound of silver as penalty. On the other hand, if a person struck someone who was of a higher social status, then that person can expect severe punishment:

Women could not necessarily expect equal treatment either. One law reads, “if a finger has been pointed at a man’s wife because of some male but she has not been caught copulating with another male, she shall leap into the River for the sake of her husband,” (translation by H. Dieter Viel).

On the other hand a woman could, depending on the circumstances, get an inheritance. There were laws protecting a woman in the event that her husband was taken captive in war and had to live with another man when her food ran out. There were also laws that governed the support a temple-woman should receive from her brothers after her father had died.

Burden on the accuser and judges

In the laws, it is clear that not only is there a burden on the accused but also on the accuser should they be unable to prove their case.

Judges were also held to a certain standard in the laws. Hammurabi ruled a vast empire and would not have been able to rule on every case himself. Van de Mieroop notes that in the king’s absence, a committee of men from the communities involved could act as a judge in Hammurabi’s place.

The penalties for a judge trying to change a sealed verdict was severe, “he shall pay 12 times the amount of the loss which had occasioned the trial,” reads the law in question.

How were the laws formed?

Hammurabi was not the first ruler in the Middle East to write down laws. Dominique Charpin, a professor at École Pratique des Hautes Études in Paris, writes in his book "Writing, Law and Kingship in Old Babylonian Mesopotamia" (University of Chicago Press, 2010) that scholars know of the existence of three law codes, set down by kings, that preceded Hammurabi.

The oldest was written by Ur-Nammu, a king of Ur, who reigned 2111-2094 B.C., about three centuries before Hammurabi. “These older codes obviously inspired that of Hammurabi,” Charpin writes.

In addition, Hammurabi would probably have drawn on his own personal experiences in putting together his laws, basing them in part on past cases that he had ruled on.

Scholars have noted problems in reading Hammurabi’s laws as a full law code in the modern sense. For instance, van de Mieroop notes that the code does not cover every dispute that could have arisen and contains inconsistencies.

“One law demands the death penalty when something is accepted for safekeeping without a proper document, because the recipient is a thief,” van de Mieroop writes. On the other hand, a related law simply states that “if a man gives goods for safekeeping without witnesses or a contract and they deny that he gave it, that case has no basis for a claim.”

Van de Mieroop also notes that “in the extensive documentation of court cases judged in Hammurabi’s reign and afterwards there is no reference to a collection of laws that was the basis for a decision.”

The purpose of the stele

Another problem that researchers face is what was the purpose of the stele, now in the Louvre, that originally would have been displayed at Sippar? Charpin notes that, even if one could read, the stele would be difficult to use as a reference to look up a law.

Van de Mieroop writes that the answer to this mystery appears to lie in the stele’s epilogue, a section of writing after the laws were given. In it Hammurabi makes two main points, one is that anyone in his kingdom could come to the statue, see (or hear) the words on it and “understand his problem, and may he be content in his heart.” In other words it was a monument to the king’s sense of justice and a way to make his subjects feel better when they felt they had been wronged.

The second point the epilogue makes is that the kings who succeed Hammurabi should not change or disregard these laws or try to alter the identity of the person who made them.

If any future ruler does try this Hammurabi puts a lengthy curse on them. “Anu, the father of the gods, the one who designated me to rule, will surely remove from him the splendour of sovereignty, whether that man is a king or a lord or a governor or a person appointed to some other function, and he will smash his staff and curse his destiny…” part of Hammurabi’s curse reads (translation by H. Dieter Viel). In other words the stele was also a monument stating that Hammurabi’s sense of justice should rule over the land forever.