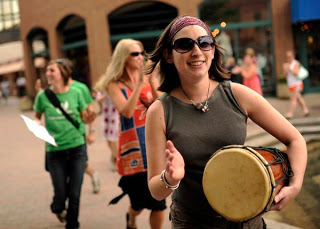 Colorado Wildfires: A Spiritual Appeal To Drum Up Rainfall

from The Denver Post: Colorado — in the midst of drought and devastating wildfires — now faces conditions reminiscent of 2011 in Texas that led Gov. Rick Perry to issue a proclamation calling for "days of prayer for rain" in his state. At the time, Texas had experienced 8,000 wildfires, with more than 1.8 million acres destroyed and nearly 400 homes lost. Colorado hasn't yet approached that number of fires or acres lost — but the devastation has been unsurpassed in state history, with six deaths and more than 650 homes destroyed. And while firefighters have made tremendous progress in recent days on the major blazes burning in Colorado, there is one simple reality: The drought continues — and with it, the efforts of lots of people to make it rain. Prayers for rain are as old as humankind, but in recent years at least five governors have asked for them.. Last summer, Oklahoma Gov. Mary Fallin proclaimed a day of prayer to end the drought, and in 2007, so did three others: Georgia Gov. Sonny Perdue, Alabama Gov. Bob Riley and South Dakota Gov. Mike Rounds. Colorado Gov. John Hickenlooper has made no proclamations — though he joked last week that he would issue an "executive order for rain" if he could — so people are moving ahead on their own, and in their prayers for rain there is an ancient echo.