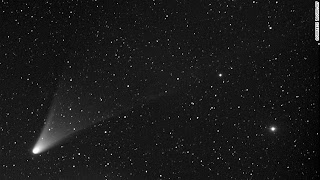 CNNU.S. article advises: "...two comets are expected to put on a naked-eye spectacle for sky watchers in the Northern Hemisphere. Up first is Comet Pan-STARRS, which gets its funky name from the telescope credited with discovering it in June 2001: the Panoramic Survey Telescope & Rapid Response System in Hawaii. The comet is already visible through telescopes in the Southern Hemisphere, and it should swing into view over the Northern Hemisphere beginning around March 8." Amateur astronomer Terry Lovejoy captured image (picture) on February 12, 2013 in Brisbane, Australia, using a QHY9 camera and an 8" telescope with 5 minutes exposure. You can peer skyward on Friday for some possible eye candy!