Comet PANNSTARRS: How To See It 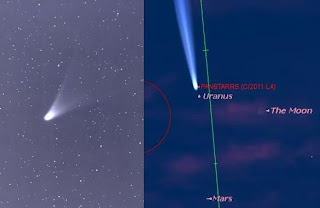 "After gaining 15-20° degrees of elevation from our northern hemisphere vantage point, Comet PanSTARRS will then begin running roughly parallel to the western horizon on each successive evening for mid-northern latitude observers. This first half of March is also when Comet PanSTARRS will have the potential to appear at its brightest. In the best case scenario, we’ll have a comet with a -1st magnitude coma and a tail pointing straight up from the horizon like an exclamation point. In the worst case situation, we’ll have a +3rd magnitude fuzzy comet only visible through binoculars...But if you observe the comet on no other night, be sure to check it out on the evening of March 12-13th. The comet will have just crossed the ecliptic, and will be joined by a slim crescent Moon just over a day old. If you’ve got binoculars or a telescope, you might just be able to spy the planet Uranus at 6th magnitude only 24’ from the head of the comet on March 12th."

Comet Pannstarrs was discovered in 2011 by the Panoramic Survey Telescope and Rapid Response System (PanSTARRS website) on Maui.   The comet will be rising over western horizon for the next few nights with best opportunity around March 12th, when PannStarrs will be approximately 10 degrees above horizon..  PannStarrs remains visible through March 19th.  It's time to get out the binoculars!.