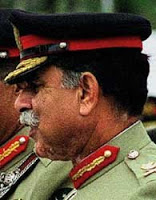 from george washington: In response to a Freedom of Information Act Request submitted by Kevin Ryan, Mick Harrison and Paul Smith, the government has disclosed documents (300kb PDF) confirming that Pakistani ISI General Ahmed - the guy who wired $100,000 to lead hijacker Atta -- met with a 'Senior Representative from the Joint Chiefs of Staff", Centcom Commander General Tommy Franks, the Director of the Defense Intelligence Agency, Wolfowitz, Feith, other PNAC members, and probably Intelligence Committee members Graham and Goss, and others in the week before 9/11.