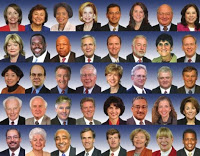 democrats don’t care about you

from the people's voice: Public Service Announcement: You don’t need political analysts; just read the news. Singular lines of news suffice at times. You are now in the post-analytic age. Here is a one-liner from a Yahoo! News piece on the recent passage of the Snoops-R-Us bill in the Senate: “Obama ended up voting for the final bill, as did Specter.”

That one sentence tells you all you need to know about where Obama and most Democrats stand on the issue of civil liberties and what political leaders are not willing to do to protect those liberties. Now, that should be enough to make you withdraw your support from Obama’s presidency — if, that is, you still have illusions about the Democrats in general, and Barak Obama in this round of Anybody-But-Bush/McCain.

“What?” says you, “And let McCain win the election?”

To that it must be said: What on earth is the difference when the Democratic presidential nominee, during the election campaign, votes in the same way as a right-wing Republican not just on any bill, but on a bill curtailing people’s civil liberties? ...

If you want real change and you think voting can bring some change, then know this: the only difference you can make by voting is casting a protest vote. Tell the establishment they don’t represent you in a written, documented form.

Write in your own name on the ballot; better, write in your grandmother’s name. Stop handing blank checks to a government that is so plainly bent on screwing you. Stop being slaves. At least spit back in their face. Don’t waste your vote, don’t waste the only political force you can legally exercise, and don’t waste your voice; vote for Nader, vote for McKinney, for anybody but the establishment boys.