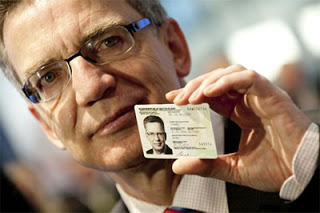 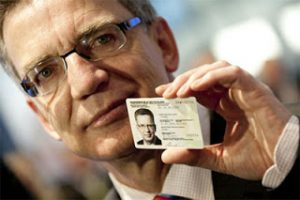 from kurt nimmo: Democrat Chuck Schumer and Republican Lindsey Graham have joined forces in an effort to force a biometric ID on the American people. The new national ID scheme is part of a comprehensive immigration bill now in the Senate.

Schumer and Graham want every American worker required to have a biometric ID card in order to work. “Under the potentially controversial plan still taking shape in the Senate, all legal U.S. workers, including citizens and immigrants, would be issued an ID card with embedded information, such as fingerprints, to tie the card to the worker,” reports The Wall Street Journal.

Schumer and Graham, who face an “uphill effort to pass a bill,” plan to meet with Obama this week in order to update him. An administration official told the Journal the White House has no position on the controversial ID card.

Previous efforts to force a national ID on the American people have ended in failure. Shortly after September 11, 2001, Congress took up the idea of requiring every citizen to have a national ID card. Before the election of 2004, the revisited the issue.

Section 403(c) of the Patroit Act specifically requires the federal government to “develop and certify a technology standard that can be used to verify the identity of persons” applying for or seeking entry into the United States on a U.S. visa “for the purposes of conducting background checks, confirming identity, and ensuring that a person has not received a visa under a different name.”

In 2005, Congress passed the Emergency Supplemental Appropriations Act for Defense, the Global War on Terror, and Tsunami Relief, or REAL ID.

“States were originally given until May 2008 to comply with the law, but widespread resistance resulted in the Federal Government changing that deadline not once, not twice, but three times,” notes the Tenth Amendment Center. “More than two dozen states have passed resolutions or binding laws opposing the act, rendering the Bush-era law nearly null and void in practice. Bottom line? Nullification works.”

Senator Graham does not believe his biometric national ID scheme will violate the privacy of Americans. “We’ve all got Social Security cards,” he said. “They’re just easily tampered with. Make them tamper-proof. That’s all I’m saying.”

Graham is the only Republican to publicly announce support for a law requiring Americans to hold a biometric national ID card and he wants at least one other GOP co-sponsor to launch the effort.

According to the Journal, biometric data for the card would likely be either fingerprints or a scan of the veins in the top of the hand. It would be required of all workers, including teenagers, with current workers needing to obtain the card only when they next change jobs. Employers would be required to purchase a scanner.

A biometric ID system is not about securing the border or preventing terrorism. It is about tracking citizens.

“By far the most significant negative aspect of biometric ID systems is their potential to locate and track people physically. While many surveillance systems seek to locate and track, biometric systems present the greatest danger precisely because they promise extremely high accuracy. Whether a specific biometric system actually poses a risk of such tracking depends on how it is designed,” explains the Electronic Frontier Foundation.