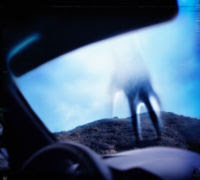 from mtv: A dystopian civilization in the throes of extinction. A government poisoning its own citizens through the drinking water. Military police raiding private residences. The end of civil liberties. The creation of a Church-State. Mind control.

The contents of some conspiracy theorist's personal manifesto? The plot of a rote first-person shooter? The results of a quick jaunt through Snopes.com? Actually, it's all part of the elaborate (and somewhat terrifying) concept behind Nine Inch Nails' upcoming Year Zero album (due April 17), details of which are currently being disseminated through a series of increasingly spooky — and downright odd — Web sites.

Strangely enough, the story actually began on the back of a T-shirt sold on NIN's current European tour. Dates and cities are listed, with certain letters highlighted. When those letters were arranged, they spelled out the phrase "I am trying to believe," which most saw as just another statement of shattered hope from NIN mastermind Trent Reznor ... that was, until one particularly, uh, "enterprising" individual decided to Google the phrase.

What was revealed was a rather unsettling site (IAmTryingToBelieve.com) dedicated to information on "Parepin," a drug allegedly added to the water supply by the federal government at some unknown date to protect citizens from bioterror attacks. While all appears to be normal, the author of the site — who is not identified — paints a different picture, referring to Parepin as "bioterrorism" being waged on U.S. citizens without their knowledge, designed to placate them...

And things only grow more confusing — and unnerving — from there. Members on a NIN fan site, EchoingtheSound.org, soon began to uncover even more sites, all seemingly unrelated upon first glance. But through careful — and some may say obsessive — examination they all began to tie together, creating a rather Orwellian picture of the United States circa the year 2022.

AnotherVersionOfTheTruth.com is, on the surface, a site created by "the U.S. Bureau of Morality," featuring a fluttering flag superimposed over a rippling cornfield and emblazoned with the motto "Zero Tolerance. Zero Fear." But if users click and drag their mouse across the image, what is revealed is a black-and-white photo of a bombed-out wasteland. Visitors are then taken to a secret "messageboard" with topics like "End of the World?" and "Cops Murder Muslim Kid." ...

Are we to believe, then, that in the future the government has really been drugging its citizens? Will we engage in a Holy War with Muslim nations? Will secret police groups creep in the shadows at night? We're led to believe that the answer to all of these questions is "Yes."