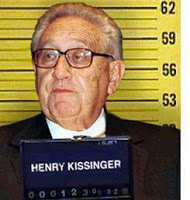 from afp/raw story: An attorney for a victim of Uruguay’s 1973-1985 dictatorship has asked his government to request the extradition of former US secretary of state Henry Kissinger over his alleged role in the notorious Operation Condor.

Condor was a secret plan hatched by South American dictators in the 1970s to eliminate leftist political opponents in the region. Details of the plan have emerged over the past years in documents and court testimony.

The Latin American dictatorships of the time “were mere executors” of a “plan of extermination” hatched in the United States by a group led by Kissinger, said attorney Gustavo Salle, who represents the family of Bernardo Arnone…

A leftist activist, Arnone was arrested in October 1976 and flown to Argentina with a group of political prisoners that vanished and were presumably executed.

Kissinger played a dominant role in US foreign policy between 1969 and 1977, and was a strong supporter of right-wing regimes across Latin America.

The extradition request comes as the topic of rights violations during Uruguay’s dictatorship is making headlines again, with Salle citing evidence from declassified US State Department documents.

Witnesses are set to testify in April in a case that began in September against eight retired regime officials over rights violations.