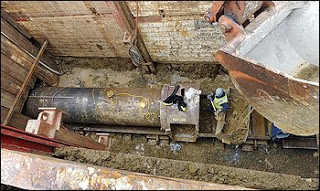 from washington post: This part happens all the time: A construction crew putting up an office building in the heart of Tysons Corner a few years ago hit a fiber optic cable no one knew was there.

This part doesn't: Within moments, three black sport-utility vehicles drove up, a half-dozen men in suits jumped out and one said, "You just hit our line."

Whose line, you may ask? The guys in suits didn't say, recalled Aaron Georgelas, whose company, the Georgelas Group, was developing the Greensboro Corporate Center on Spring Hill Road. But Georgelas assumed that he was dealing with the federal government and that the cable in question was "black" wire - a secure communications line used for some of the nation's most secretive intelligence-gathering operations.

"The construction manager was shocked," Georgelas recalled. "He had never seen a line get cut and people show up within seconds. Usually you've got to figure out whose line it is. To garner that kind of response that quickly was amazing."

Black wire is one of the looming perils of the massive construction that has come to Tysons, where miles and miles of secure lines are thought to serve such nearby agencies as the Office of the Director of National Intelligence, the National Counterterrorism Center and, a few miles away in McLean, the Central Intelligence Agency. After decades spent cutting through red tape to begin work on a Metrorail extension and the widening of the Capital Beltway, crews are now stirring up tons of dirt where the black lines are located.

"Yeah, we heard about the black SUVs," said Paul Goguen, the engineer in charge of relocating electric, gas, water, sewer, cable, telephone and other communications lines to make way for Metro through Tysons. "We were warned that if they were hit, the company responsible would show up before you even had a chance to make a phone call."