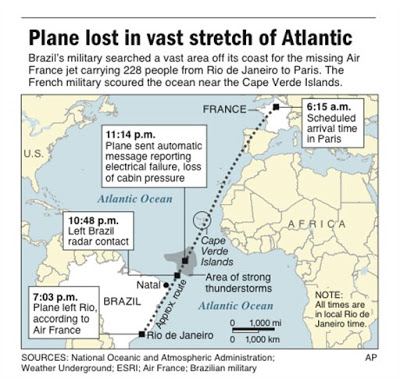 high seas search for air france jet with 228 aboard

from reuters: Search planes scoured the dark waters of the Atlantic Ocean early on Tuesday, looking for the remains of an Air France jetliner that disappeared in a severe storm with 228 people on board. The Airbus A330 went missing on a flight from Rio de Janeiro to Paris and French President Nicolas Sarkozy said there was little chance of finding any survivors. France and Brazil sent military aircraft and ships to try to find wreckage on high seas between Brazil and West Africa...

It was carrying 216 passengers of 32 nationalities, including seven children and one baby, Air France said. Sixty-one were French citizens, 58 Brazilian and 26 German. Twelve crew members were also on board. Tearful relatives in Paris and Rio were attended to by teams of psychologists. One of the Brazilians on board was Pedro Luis de Orleans e Braganca, a direct descendant of Dom Pedro II, the last emperor of Brazil, a spokesman for the royal family told Reuters. Executives from French tire company Michelin (MICP.PA), the Brazilian unit of German steelmaker ThyssenKrupp (TKAG.DE), and Brazilian mining giant Vale (VALE5.SA) were also among the passengers, said company officials and family members.

The Air France plane flew into turbulent storms four hours after taking off from Rio and 15 minutes later sent an automatic message reporting electrical faults, the airline said. The company said a lightning strike could be to blame and that several of the mechanisms on the Airbus 330-200 (EAD.PA), which has a good safety record, had malfunctioned. But aviation experts said lightning strikes on planes were common and could not alone explain a disaster. Sources with access to flight data sent to the World Meteorological Organization said two Lufthansa jets passed through the same area of turbulence on Monday without incident.

US geologist & wife were on air france plane
from ap: A spokesman for Devon Energy Corp. confirms that the Americans on an Air France plane which disappeared over the Atlantic Ocean were 60-year-old Michael Harris and his wife, Anne Harris. Chip Minty of Oklahoma City says Michael Harris was a geologist in Devon's Rio de Janeiro office. He started with Devon in 2004 and became a full-time employee in 2006. Minty says Harris had moved from Houston to Brazil in July.

update1: brazil confirms air france jet crashed in ocean
from ap: Brazilian Defense Minister Nelson Jobim says a 3-mile (5-kilometer) path of wreckage found in the Atlantic Ocean confirms that an Air France jet crashed in the sea. Jobin said Tuesday that discovery of the debris by Brazilian military pilots "confirms that the plane went down in that area" hundreds of miles (kilometers) from the archipelago of Fernando de Noronha.

updates from jun4:
flight 447: what could have happened?

pilot claims air france flight 447 was blown out of the sky
from daily mail: Investigators are baffled how a modern plane operated by three experienced pilots could have suddenly plunged out of the sky on a routine transatlantic flight. One theory is that the jet was downed by a mid-air collision, possibly involving a military spy jet or an aircraft piloted by drug-runners. Another is that the jet was hit by lightning, causing a massive electrical short circuit. But an unidentified senior long-haul Air France pilot told a French newspaper: "I have flown these jets for Air France for more than ten years and the chances of an electrical fault seem unfeasible to me. There are five electricity supplies on the plane and they would all have to fail." He said a bomb was the only logical reason for why the captain failed to send out a mayday call.

did bomb bring down french airbus?

flight447.com domain name registered in '07
from threat level: As investigators seek to unravel the fate of Air France flight 447, there’s been speculation online about an unusual domain name registration made some two years prior to this week’s plane crash, flight447.com. The mystery of the Air France flight that disappeared this week deepened after news agencies on Wednesday confirmed a previous Air France flight from Buenos Aires to Paris was the target of a bomb threat just days before. That plane was inspected and arrived without incident. Now it has emerged that someone registered a domain for the missing plane’s flight number on September 30, 2007. The domain name, which currently point(ed) to a search engine, expires on the same date this year and was registered to Success Incorporated in Malibu, California. It’s not unusual for individuals to register domain names shortly after news breaks on a big story and then to sell them. Indeed, a second domain AirFrance447.com was registered the day of the crash, hours after the news made headlines, and a third domain AirFranceLawSuit.com is being auctioned on e-Bay this week after being registered the day after the crash. The timing of the two-year-old flight447.com, however, makes it unusual. But when contacted, the owner of the latter domain, Kari Bian, said that the connection between his registration and the crash is coincidental. “It’s just an accident (that there’s a connection),” he said. “I have nothing to do with anything. I feel really bad for that flight.” The cause of the crash is still unknown. 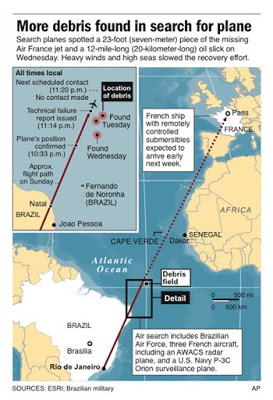 from ap: Air France has told families of passengers aboard Flight 447 to abandon any hope of survivors. A counsellor present at a meeting with Air France's CEO Pierre-Henri Gourgeon says he told the families that the plane broke apart either in the air or when it slammed into the ocean's surface. Guillaume Denoix de Saint-Marc, who was asked by Paris prosecutors to help counsel family members, said Thursday "what is clear is that there was no landing. There's no chance the escape slides came out." Denoix de Saint-Marc says Gourgeon told families at the Wednesday meeting there were no survivors. Military rescue planes were trying to narrow the search zone Thursday as ships headed to the site to recover wreckage.

brazil recovers first air france flight 447 debris
from ap: A Brazilian helicopter crew recovered the first wreckage from Air France Flight 447 on Thursday, pulling a cargo pallet from the sea. No sign of human remains have been spotted, and Air France has told families that the jetliner broke apart, killing all 228 people on board... Soldiers at Fernando de Noronha's airport, where any recovered human remains would be taken, unloaded body bags and a refrigerator truck on Thursday from a military plane... Patrick Smith, a U.S. airline pilot and aviation analyst, said the failures could have begun with a loss of electrical power, possibly as the result of an extremely strong lightning bolt. "What jumps out at me is the reported failure of both the primary and standby instruments," Smith said. "From that point the plane basically becomes unflyable. If they lost control and started spiraling down into a storm cell, the plane would begin disintegrating, the engines and wings would start coming off, the cabin would begin falling apart," he said. The pilot of a Spanish airliner flying nearby at the time reported seeing a bright flash of white light plunging to the ocean, said Angel del Rio, spokesman for the Spanish airline Air Comet. "Suddenly, off in the distance, we observed a strong and bright flash of white light that took a downward and vertical trajectory and vanished in six seconds," the pilot wrote in his report, del Rio told the AP. The pilot of the Spanish plane, en route from Lima, Peru to Madrid, said he heard no emergency calls. France's defense minister and the Pentagon have said there were no signs that terrorism was involved, and Jobim, the Brazilian defense minister, said "that possibility hasn't even been considered."

could a computer glitch have brought down air france 447?

debris 'not from air france jet' 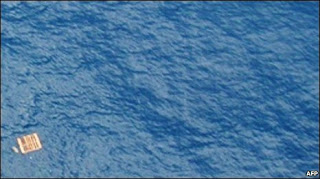 from bbc: Debris recovered from the Atlantic by Brazilian search teams is "sea trash" and not from a lost Air France jet, a Brazilian air force official has said. Brig Ramon Borges Cardoso contradicted earlier reports, saying "no material from the plane has been recovered". Teams found buoys and a wooden pallet and spotted a fuel slick, and are now searching for an airline seat and a chunk of metal seen earlier this week.

did a meteor bring down flight 447?

air france crash mystery deepens
from afp: The mystery surrounding the crash of an Air France plane off the coast of Brazil deepened after Brazilian officials said items they had pulled from the sea were not in fact debris from the downed Airbus. The search by ships for wreckage from Air France flight AF 477, which came down early Monday as it was flying from Rio de Janeiro to Paris with 228 people on board, continued in a zone where confirmed items from the plane had been spotted earlier in the week. "Up to now, no material from the plane has been recovered," Brigadier Ramon Cardoso, director of Brazilian air traffic control, told reporters in the northeastern city of Recife late Thursday. That contradicted a statement Cardoso made earlier Thursday when he said a pallet and two buoys plucked from the Atlantic by navy crews were the first pieces of the Air France crash. In fact, Cardoso admitted later, they were nothing more than sea "trash," probably from a ship, as was a big oil patch originally described as a fuel slick from the French jet.