from danger room: Something horrible is happening in Mumbai. 80 people are dead and 250 injured in a coordinated series of attacks on luxury hotels, train stations, and tourist attractions in India's financial capital. At least seven sites were struck, the Times of India reports. And the death toll could easily climb much higher. 60 lifeless bodies and over 200 injured people were brought to a single hospital, according to DNA Mumbai.

"A little-known group, the Deccan Mujahideen, has claimed responsibility," the AP reports. The strikes "come after a series of blasts attributed to Islamist terrorists over the summer and autumn in other cities around India," the Wall Street Journal notes.

"Firing was also reported at Cama Hospital in south Mumbai, police said, adding that a blast was reported in a taxi under a flyover in suburban Vile Parle," the paper says. "Three persons were killed in a bomb explosion in a taxi on Mazegaon dockyard road and an equal number were gunned down at [the] Taj Hotel."

"Bellboys could be seen rushing the injured out on luggage trolleys," according to DNA Mumbai. The victims "included three senior police officers, including the head of [the state's] anti-terror squad," the Wall Street Journal reports.

More bloodshed could come from the Taj attack. The gun-toting terrorists who hit the landmark hotel also took 15 people, half of them foreigners, hostage on the roof of the luxury Taj Hotel, an escaped hostage tells the Times of India. The attackers, men in their early 20's, honed in on "anyone with British or American passports," an eyewitness said.

Survivors of the attack on the Oberoi hotel told a similar story. A British restaurant-goer tells Sky News television that "the attackers were singling out Britons and Americans."

update1: mumbai attacks to be blamed on pakistan?

from paul joseph watson: Coordinated attacks across Mumbai, India’s financial capital, which have killed up to a hundred people and injured hundreds more, are likely to be blamed on a terrorist organization linked to the Pakistani ISI, providing further justification for controversial U.S. bombings inside Pakistani territory and heightened rhetoric against Pakistan on behalf of President elect Barack Obama...

Journalist Stephen Schwartz notes that several terrorist and criminal groups are “backed by senior officers in the Pakistani army, the country’s ISI intelligence establishment and other armed bodies of the state.” Author Daniel Byman states, “Pakistan is probably today’s most active sponsor of terrorism.”

Indeed,Indian police claimed that the Pakistani ISI directed the July 2006 train bombing in Mumbai which killed 186 people, which was blamed on the Islamist militant group Lashkar-e-Toiba, an organization based in Pakistan. Look for the same organization or an affiliated group to be blamed for today’s attacks.

As Bloomberg reports today, “The government has previously blamed terrorist attacks on organizations linked to foreign powers, without offering evidence or making arrests. Local media often blame the attacks on groups backed by Pakistan or Bangladesh, without identifying the security officials who provided the information.”

With shrill corporate media outfits begging for a scapegoat to be used as war on terror propaganda, it won’t be long before an Al-Qaeda-Pakistan link is claimed. Indeed, early reports already state that the attacks are "thought to be linked to Al-Qaeda," offering no evidence and in spite of the fact that an unknown group, Deccan Mujahideen, has clamed responsibility for the massacre. The Deccan Plateau is a large plateau in India, suggesting this is where the terrorist group was based.

update2: experts doubt al-qaeda link in mumbai attacks
from iht: Global terrorism experts said Thursday they had never heard of the group. And based on its tactics, they said, it was probably not a cell or group linked to Al Qaeda. "It's even unclear whether it's a real group or not," said Bruce Hoffman, a professor at the School of Foreign Service at Georgetown University and the author of the book "Inside Terrorism." "It could be a cover name for another group, or a name adopted just for this particular incident." Christine Fair, senior political scientist and a South Asia expert at the RAND Corporation, was careful to say that the identity of the terrorists could not yet be known. But she insisted the style of the attacks and the targets in Mumbai suggested that the militants were likely to be Indian Muslims - and not linked to Al Qaeda or the violent South Asian terrorist group Lashkar-e-Taiba. "There's absolutely nothing Al Qaeda-like about it," she said of the attack. "Did you see any suicide bombers? And there are no fingerprints of Lashkar. They don't do hostage taking, and they don't do grenades." Hoffman agreed that the assault was "not exactly Al Qaeda's modus operandi, which is suicide attacks."

update3: attacks blamed on al-qaeda as pretext for response 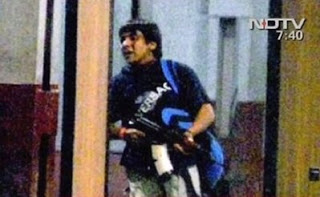 from paul joseph watson: The majority of the corporate media has gleefully seized upon the terror attacks in Mumbai to claim that they are the work of “Al-Qaeda,” despite clear and contradictory evidence suggesting otherwise, as a pretext to increase bombing campaigns in Pakistan and beef support for the ailing war on terror in Afghanistan. The swiftness with which the media blamed “Al-Qaeda” was staggering, especially considering the fact that the attacks had not even concluded before the boogeyman was whipped out of the closet once more to act as a poster child for the war on terror and allow the TV networks to show lots of blood, panic and authority figures pointing guns at people. The only claim of responsibility for the attacks came from the “Deccan Mujahideen,” the Deccan Plateau being an area in southern India, but the press, usually breathless to take the first obscure claim of culpability and set it in stone, are now belittling this explanation as a likely hoax in an attempt to pin the blame on the all-mighty mythical Al-Qaeda. “Earlier eyewitness reports from the hotels suggested the attackers were singling out British and American passport holders,” reports the BBC. “If the reports are true, our security correspondent Frank Gardner says it implies an Islamist motive - attacks inspired or co-ordinated by al-Qaeda.” Really? Perhaps the BBC’s “security correspondent” should be worried about his job security, because the facts directly contradict previous alleged “Al-Qaeda” attacks. Since when do Al-Qaeda take hostages? Since when do they hang around to be caught? Since when do Al-Qaeda use grenades rather than bombs or suicide bombs? And if the attacks were targeted against British and American citizens then tell me why, out of at least 101 killed, was there only one British victim?