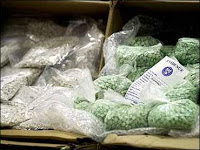 "The investigation has led to the indictment and prosecution of more than 20 people - from distributors to overseas sources of supply - and the seizure of more than 600 pounds of imported hashish and other drugs from the United States and France," according to a CNN report. Meanwhile in Texas, Cameron County Constable Saul Ochoa was arrested by the FBI yesterday morning for possession and distribution of marijuana. Ochoa's brother is Justice of the Peace Benny Ochoa III of Port Isabel and his cousin is Port Isabel Police Chief Joel Ochoa.