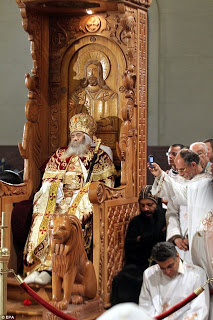 from nytimes.com: A tearful crowd of thousands that included members of Egypt’s emerging political class attended a funeral service Tuesday for Pope Shenouda III, who spent four decades as the popular and charismatic leader of the country’s Coptic Orthodox Church. During a two-hour morning ceremony, with prayers read in Arabic and Coptic, the pope, dressed in an embroidered robe in a white, open coffin, was remembered as a “wise captain” who built bridges to Muslims and other Christian denominations as he spread the church’s influence around the world. The death Saturday of the only pope many Egyptian Copts had ever known underscored feelings of unease many Christians have about the tumult of Egypt’s political transition since the fall of President Hosni Mubarak. By the early evening, there were scenes of pandemonium as thousands of people mobbed a van carrying Shenouda to his burial site, in a monastery in northern Egypt. Red-faced military policemen wrestled mourners carrying the pope’s portraits as they strained for a last glimpse through the dark windows of the white van.