Or, you could get good storable food at efoods direct 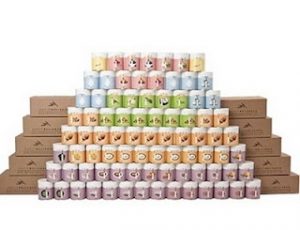 from gizmodo: Either our nation's obesity problem is just as bad as they say, or Costco knows something we don't, because the aircraft carrier-scaled big box store is now offering enough (horrifying) food to last you a year for a cool $800.

The monstrous, 5,011 serving package, courtesy of food outfitter Shelf Reliance (hey, at least we'll have kept our senses of humor during doomsday!) claims their end days buffet contains "only top-of-the-line products ... developed with everyday menu planning in mind." Which makes sense, of course, because the only thing worse than knowing that the entire eastern seaboard has been leveled by nukes or a horde of flesh-feasting space titans is repetitive bunker fare—dehydrated fish skin AGAIN, mom?