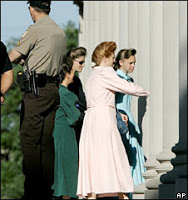 from bbc: An appeal court has ruled that US officials had no right to seize 463 children from a polygamist sect in western Texas last month. The court said that the reasons given for the children's removal were "legally and factually insufficient". But it did not immediately order the return of the children to the ranch.

In April, officials raided a compound of the sect, saying young girls were being forced into marriage and sex. The children were placed into foster care. But the Texas Third Appeal Court ruled that officials failed to demonstrate the children were in any immediate danger, which is the only legally allowable reason for taking children from their homes without court proceedings.