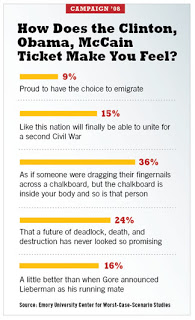 After nearly a year of verbal attacks and negative campaign ads, the nominees announced that, for the good of the country, they were willing to push their differences to the forefront and grant the American people the ticket they've been dreading all along.

"No other ticket is capable of rallying this nation around a clearer, more unified message of chaos and hopelessness," the candidates said in unison from three separate podiums, each adorned with its own American flag arrangement and personal message.