Crimea and the Last Crusade 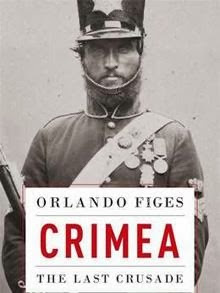 from TheTelegraph.co.uk: The war, in which Britain and France took on Tsarist Russia to defend the tottering Ottoman Empire, is often lost amid the detritus of the Victorian age. Yet, as Figes points out, the war was a seismic historical event, representing the collapse of the old Concert of Europe, hobbling Russian power for almost a century, and paving the way for the emergence of Germany and Italy as unified nation-states. It was the last “old” war, with regular truces to clear battlefields of the dead; more importantly, it was also the first “truly modern war”, a conflict of steamships and railways, covered by war correspondents and press photographers. The death toll, too, was a chilling harbinger: in total, Figes suggests, at least 750,000 men lost their lives, many through illness and disease. “It was a horrible scene,” one British officer wrote after surveying the aftermath of the Battle of the Alma. “Death in every shape and form.” At the time, most British soldiers had no idea why they were fighting Russian peasants in the hills of the Crimea. To modern eyes, too, the causes of the war seem bewilderingly esoteric: essentially, it represented the death throes of the Ottoman Empire, which had dominated south-eastern Europe for centuries but had become a sclerotic invalid.

What Figes captures superbly is the extent to which this was a religious war. At the heart of the Tsarist regime was the idea of Holy Russia, with the emperor as defender of Orthodoxy and heir to Byzantium. To Nicholas I, a military enthusiast who slept on an army camp bed every night, no dream glittered more brightly than that of reclaiming Constantinople from the Turks and celebrating mass in Hagia Sophia.

“Nothing is left to me but to fight, to win, or to perish with honour, as a martyr of the holy faith,” he explained in 1854, “and when I say this I declare it in the name of Russia.”

Nicholas’s adversaries were rather less mystical but just as colourful. France’s Napoleon III was an extravagantly moustachioed little man who craved military success to legitimise his regime. In Britain, the key factor was the pressure of public opinion, whipped up by newspapers that cast the Orthodox Tsar as a “semi-pagan” bully and the Muslim Sultan, rather implausibly, as a champion of “religious toleration”.

Nobody better exploited this mood than Viscount Palmerston, the cynical Whig populist who became the embodiment of Victorian jingoism. If Palmerston had got his way, the allied forces would probably have gone all the way to Moscow. His goal, he told his colleagues, was to smash the Russian Empire forever, ensuring eternal British dominance in Asia.

In reality, the British and French forces rapidly got bogged down outside the Crimean port of Sevastopol, which became their primary goal for the majority of the war.

Thanks to new rifle and artillery technology, the slaughter was horrendous: at Inkerman in November 1854, 15,000 men were killed in just four hours. The British troops, many of them recruited from Ireland, suffered particularly badly, thanks not least to a ludicrously amateurish officer class that should have been reformed years before. Under-equipped and ill-supplied, thousands of British soldiers also died unnecessarily from cholera and dysentery. “Ah! These English,” wrote one French officer. “They are men of undoubted courage but they know only how to get themselves killed.”

Figes proves an excellent guide to the vagaries of the battlefield, the suffering of the ordinary soldiers and the way in which the war became a crucial part of late-Victorian patriotic mythology, contributing to a new ethos of muscular Christianity. His use of Russian archives in particular lifts this book above its predecessors, but he also finds room for such well-known stories as the Charge of the Light Brigade and the rise of Florence Nightingale.

I would perhaps not go so far as to say, as Figes himself did of his last book, that “I hope he writes for ever”. But after what must have been a bruising year, I hope that he has plenty more books like this left in him.