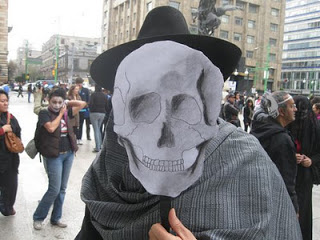 from latimes: It was billed as "the first act of collective psycho-magic in Mexico." The call made by the cult mystic Alejandro Jodorowsky said the event would seek to "heal" the country of the cosmic weight of so many dead in the drug war, by gathering for something he called the March of the Skulls. On Sunday, on a wet and frigid morning in this mountain capital, 100's of Jodorowsky fans answered the open convocation.

They donned black top hats and black shawls, and carried canes and Mexican flags colored in black. They wore calavera face paint or masks to give themselves the look of stylish skeletons gathered in this often-surreal city in the name of Mexico's tens of thousands of sometimes nameless drug war dead. "Long live the dead!" they shouted.

Truthfully, the Marcha de las Calaveras was a minor weekend event compared to the city's heavily publicized "zombie walk" the day before, in which almost 10,000 people playing zombies marched through the city's core. That event marked yet another one of Mexico City's recent obsessive hobbies: breaking Guinness world records.

Yet for the estimated 3,000 people who showed up to the Jodorowsky march over the course of the day, it was significant as a rare public appearance in Mexico by the Chilean-born filmmaker and tarot guru. Jodorowsky lived in Mexico for many years and produced his most well-known works in the country, the films "El Topo," "Santa Sangre," and "The Holy Mountain."

The event also demonstrated that Mexicans seem willing to try almost anything at this point - even a counterculture-era act of public mysticism - to seek an end to the awful violence brought by the fighting between the government and the cartels, a war that has cost more than 40,000 lives since December 2006.