senate bill to turn US into battlefield, vote on #ndaa looms 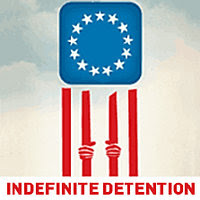 from presstv: American rights activists have slammed the US Senate for gearing up to vote on a bill on Monday that would define the whole of the United States as a ‘battlefield‘ and allow the military to arrest American citizens in their own back yard without charge or trial.

The reactions comes after the American Civil Liberties Union (ACLU) said last week that “the senate is going to vote on whether Congress will give this president-and every future president – the power to order the military to pick up and imprison without charge or trial civilians anywhere in the world. The power is so broad that even US citizens could be swept up by the military and the military could be used far from any battlefield, even within the United States itself.”

Under the ‘worldwide indefinite detention without charge or trial‘ provision of S. 1867, the National Defense Authorization Act bill, which is set to be up for a vote on the Senate floor Monday, the legislation will “basically say in law for the first time that the homeland is part of the battlefield,” said South Carolina’s left-wing Republican Senator Lindsey Graham, who supports the bill.

The bill was drafted in secret by Senators Carl Levin (D-Mich.) and John McCain (R-Ariz.), before being passed in a closed-door committee meeting without any kind of hearing, the ACLU added.

This means Americans could be declared domestic terrorists and thrown in a military brig with no recourse whatsoever.

updates: senate backs military custody of terror suspects*
obama lawyers say citizens targeted if at war with US*
15 dems join repubs to give military power to imprison suspects indefinitely*
treason from within: the road towards a police state in america*
video: americans could be stripped of their rights and sent to guantanamo bay*
ndaa: another step in the fascist takeover of america*
video: ‘battlefield america’ as US citizens face indefinite military detention*

5 responses to “senate bill to turn US into battlefield, vote on #ndaa looms”