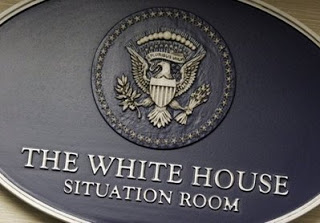 from afp: Former top US intelligence officials will become cyberwarriors on Tuesday in a simulation of how the US government would respond to a massive cyberattack on the United States. “The scenario itself is secret,” said Eileen McMenamin, vice president of communications for the Bipartisan Policy Center (BPC), which is hosting the event dubbed “Cyber ShockWave.” “The participants don’t even know what it is,” McMenamin told AFP. “None of them know what’s going to transpire.” For Cyber ShockWave, a room at the Mandarin Hotel here is being transformed into the White House Situation Room, where the president and his top advisers typically meet to address national emergencies. “We’ll have all of these different screens with different information coming in,” McMenamin said. “The members of the cabinet are going to have to react in real time as they would in real life.”

“We’ll see how they coordinate with the private sector as well,” she said, as they sift through intelligence and news reports to mount a response to the “large-scale cyber crisis” and provide advise to the chief executive.

The Cyber ShockWave simulation has been drawn up by Michael Hayden, a former director of the Central Intelligence Agency, and members of the BPC’s National Security Preparedness Group.

Joe Lockhart, former president Bill Clinton’s press secretary, will serve as a counselor to the president.

Other participants include retired general Charles Wald, the former deputy commander of US European Command, who will be Secretary of Defense, and former deputy attorney general Jamie Gorelick who will move up to Attorney General.

“It’s a great group of people,” McMenamin said. “They’ll be playing different roles than they actually played in government.”

She said Cyber ShockWave, which will be open to the media and will be filmed and broadcast by the CNN television news network at a later date, was intended to “educate the public about our vulnerabilities” to cyberattack.

“It’s a problem that every person with a laptop and a cellphone should worry about,” she said.

“Google and China are on the front pages of the papers,” McMenamin noted in a reference to a recent wave of cyberattacks on US companies which the Internet giant said originated in China.

“Things like this are happening like this every day,” she said. “People really need to be aware of what’s going on.”

Cyber ShockWave, which will last for three hours, from 10:00 am to 1:00 pm on Tuesday, is being sponsored by General Dynamics Advanced Information Systems, SMobile Systems, Southern Co., Georgetown University and PayPal.

Three years ago, the BPC and Securing America’s Future Energy (SAFE) staged another simulation, “Oil ShockWave,” which examined US dependence on foreign oil as a national security threat.

update: doomsday cyber terror attack scenario answers unsettling
from latimes: The crisis began when college basketball fans downloaded a free March Madness application to their smart phones. The app hid spyware that stole passwords, intercepted e-mails and created havoc. Soon 60 million cellphones were dead. The Internet crashed, finance and commerce collapsed, and most of the nation’s electric grid went dark. White House aides discussed putting the Army in American cities. That, spiced up with bombs and hurricanes, formed the doomsday scenario when 10 former White House advisors and other top officials joined forces Tuesday in a rare public cyber war game designed to highlight the potential vulnerability of the nation’s digital infrastructure to crippling attack. The results were hardly reassuring. “We’re in uncharted territory here,” was the most common refrain during a three-hour simulated crisis meeting of the National Security Council, the crux of the Cyber Shockwave exercise. Joe Lockhart, former press secretary to President Clinton, urged his fellow panelists to be bold. “Trust me,” he said, “you will be judged on this when this is over, and for years to come.”