from greg nixon: Some of the articles below are a few weeks old but still timely. I agree with the conclusion of Jesse's Cafe that the United States will have to default on its debt. I see this possibly before the summer of '09. How this will play out is of the utmost concern. I will continue to watch for signs of the U.S. military releasing a virus to start a flu pandemic. Martial law and quarantines may be the only way for the the elites to manage the financial crisis...

in '09 the US will be forced to selectively default & devalue its debt
from jesse's crossroads cafe: We have seen estimates that next year the US will have to finance a $2 Trillion annual deficit. They may be able to push it further into the next Administration than that by the forbearance of the world, but not by much. We'd expect a significant drop in Treasuries by 2011 at the latest. It should be obvious to anyone that we are approaching the apogee of the Treasury bubble, with the credit bubble having broken already. When the Treasury says they are facing unprecedented challenges in financing the US public debt next year that is an understatement.

washington's $5t tab
from forbes: Fighting the financial crisis has put the U.S. on the hook for some $5 trillion a report says. So far. For all the fury over Treasury Secretary Henry Paulson's $700 billion emergency economic relief fund, it seems downright puny when compared to the running total of the government's response to the credit crisis. According to CreditSights, a research firm in New York and London, the U.S. government has put itself on the hook for some $5 trillion, so far, in an attempt to arrest a collapse of the financial system.

failure of auto industry could set off catastrophe
from ap: Advocates for the nation's automakers are warning that the collapse of the Big Three - or even just General Motors - could set off a catastrophic chain reaction in the economy, eliminating up to 3 million jobs and depriving governments of more than $150 billion in tax revenue.

in a pandemic, who gets to live? 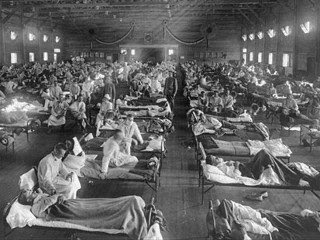 from abc: As if wars and economic crises and natural disasters weren't enough, here's a challenge for some future president that few people even want to think about: Some day, perhaps soon, a president will have to decide whose lives are the most important to save, and whose lives are "nonessential." This isn't going to be a doomsday story, because most people will survive the next influenza pandemic, which some public health experts believe is past due. It's not a question of "if," it's a question of "when," and one study from Harvard University estimates that the pandemic will kill somewhere between 51 million and 81 million people, mostly in developing countries. Hundreds of organizations and institutions around the world are developing plans for dealing with the expected pandemic, and one challenging theme is begging for more public discussion. Some people will be more important than others in fighting the disease as it spreads quickly around the planet, and many more will be left to pretty much fend for themselves.

inside the ring: missile defense working
from bill gertz: Air Force Lt. Gen. Henry A. Obering, outgoing director of the Pentagon's Missile Defense Agency, said on Wednesday that U.S. missile defenses are working and he hopes President-elect Barack Obama will continue the multibillion-dollar programs once he is briefed on them. Asked if current U.S. ground-based and sea-based systems are "workable," Gen. Obering said: "Absolutely... Not only are they workable, they've been proven in combat" in the Middle East, he said in a farewell interview with Defense reporters... A spokesman for Mr. Obama, Denis McDonough, said Saturday that Mr. Obama discussed missile defense with Polish President Lech Kaczynski but that the president-elect made "no commitment" to the interceptor base. Mr. Obama "supports deploying a missile defense system when the technology is proved to be workable," Mr. McDonough said.

homeland security will track fertilizer buyers
from danger room: The Department of Homeland Security has proposed new regulations that would make it harder to buy ammonium nitrate - an agricultural fertilizer that can be used as a bomb-making ingredient. In a notice issued late last month, the department proposed new rules that would tighten restrictions on the sale of ammonium nitrate... Ammonium nitrate was used as an ingredient in the 1995 Oklahoma City bombings. More recently, fertilizer bombs have made an appearance in Iraq. The switch to homemade explosives, however, may be one sign that military-grade explosives have become harder for insurgents to come by.

raytheon unveils 300th surveillance tower
from boston business journal: Raytheon has reached an important milestone in its production of its persistent surveillance towers. The Rapid Aerostat Initial Deployment system provides surveillance support for use in both war and peacetime. Now the US army has three hundred of them. The Waltham, Mass.-based defense contractor said the towers support intelligence, surveillance and reconnaissance missions. They are used by the US military in Afghanistan and Iraq and are also used for domestic border surveillance — both in the United States and U.S. ally nations. The towers use infrared sensors on an elevated stationary platform. Raytheon officials say the towers perform a crucial function in protecting American soldiers.

russia rejects US missile proposals
from reuters: The Kremlin on Wednesday rejected U.S. proposals aimed at easing concerns over a missile defense system in Europe and said it would try again to resolve the row once Barack Obama is in the White House. Russia says the planned U.S. system will threaten its national security and that the administration of George W. Bush, which leaves office in January, has failed to allay its concerns. "Russia is ready to cooperate with the United States on European security but considers the proposals that were sent are insufficient," Itar-Tass news agency quoted an unidentified Kremlin source as saying.