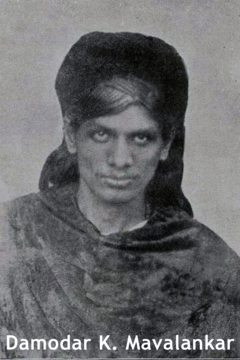 Damodar and the Hall of Initiation

from blavatskytheosophy.com: FROM A LETTER FROM DAMODAR K. MAVALANKAR
TO WILLIAM Q. JUDGE, (June 1881)

At about 2 in the morning after finishing my work I locked the door of the room and lay in my bed. Within about 2 or 3 minutes I heard H.P.B.’s voice in her room calling me. I got up with a start and went in. She said “some persons want to see you” and after a moment added “Now go out, do not look at me.” Before however I had time to turn my face I saw her gradually disappear on the spot and from that very ground rose up the form of .:. By the time I had turned back I saw two others dressed in what I afterwards learned to be Tibetan Clothes.

One of them remained with .:. in H.P.B.’s room. The other one I found seated on my bed by the time I came out. I saluted him & asked him if he had any orders to give. He said: “If there are any, they will be told to you, without being asked.” Then he told me to stand still for some time and began to look at me fixedly. I felt a very pleasant sensation as if I was getting out of my body. I cannot say now what time passed between that and what I am now going to relate.


But I saw I was in a peculiar place. It was the upper end of Cashmere at the foot of the Himalayas. [3] I saw I was taken to a place where there were only two houses just opposite to each other and no other sign of habitation. [4] From one of these came out the person who had written to me the Hindi letter above referred to and who has been subsequently corresponding with me. I may mention to you his name since he has allowed it to be published in Mr. Sinnett’s book called The Occult World which has just come out. Mr. Sinnett has dedicated the book to this person “Koot Hoomi .:.” It was his house. Opposite him stops .:. Brother K- ordered me to follow him.

After going a short distance of about half a mile we came to a natural subterranean passage which is under the Himalayas. The path is very dangerous. There is a natural causeway on the River Indus which flows underneath in all its fury. Only one person can walk on it at a time and one false step seals the fate of the traveller. Besides this causeway there are several valleys to be crossed.
After walking a considerable distance through this subterranean passage we came into an open plain in L—-k. [5] There is a large massive building thousands of years old. In front of it is a huge Egyptian Tau. The building rests on 7 big pillars in the form of pyramids. The entrance gate has a large triangular arch. Inside are various apartments. The building is so large that I think it can easily contain twenty thousand people. I was shown some of these compartments.

This is the Chief Central Place where all those of our Section [6] who are found deserving of Initiation into Mysteries have to go for their final ceremony and stay there the requisite period. I went up with my Guru to the Great Hall. The grandeur and serenity of the place is enough to strike anyone with awe. The beauty of the Altar which is in the centre and at which every candidate has to take his vows at the time of his Initiation is sure to dazzle the most brilliant eyes. The splendour of the CHIEF’s Throne is incomparable. [7] Everything is on a geometrical principle & containing various symbols which are explained only to the Initiate. But I cannot say more now as I come now under an obligation of Secrecy which K- took from me there.

While standing there I do not know what happened but suddenly I got up & found myself in my bed. It was about 8 in the morning. What was that I saw? Was it a dream or a reality? If a reality, how could I traverse the whole of the Himalayas even in my astral body in so short a time? Perplexed with these ideas I was sitting silent when down fell a note on my nose. I opened it and found inside that it was not a dream but that I was taken in some mysterious way in my astral body to the real place of Initiation where I shall be in my body for the Ceremony if I show myself deserving of the blessing. [8] My joy at that moment can be more easily conjectured than described – But enough.”