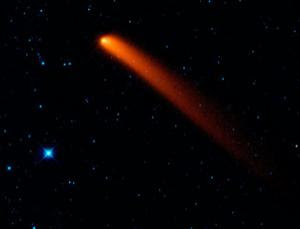 from new scientist: An infrared space telescope has spotted several very dark asteroids that have been lurking unseen near Earth’s orbit. Their obscurity and tilted orbits have kept them hidden from surveys designed to detect things that might hit our planet.

Called the Wide-Field Infrared Survey Explorer (WISE), the new NASA telescope launched on 14 December on a mission to map the entire sky at infrared wavelengths. It began its survey in mid-January.

In its first six weeks of observations, it has discovered 16 previously unknown asteroids with orbits close to Earth’s. Of these, 55% reflect less than one-tenth of the sunlight that falls on them, which makes them difficult to spot with visible-light telescopes. One of these objects is as dark as fresh asphalt, reflecting less than 5% of the light it receives.

Many of these dark asteroids have orbits that are steeply tilted relative to the plane in which all the planets and most asteroids orbit. This means telescopes surveying for asteroids may be missing many other objects with tilted orbits, because they spend most of their time looking in this plane.

Fortunately, the new objects are bright in infrared radiation, because they absorb a lot of sunlight and heat up. This makes them relatively easy for WISE to spot.