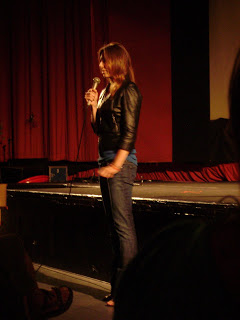 just a quick note to pat myself on the back: longtime listeners know that i was a film buff before i ever became involved in alternative news - so, i've always watched the oscars. now, i said last week on the most recent episode & interview from media monarchy that 'the hurt locker' would upset the over-blown 'avatar' - and now it has swept the oscars & i think that shows that you can have all the bells & whistles in the world, but ultimately it has to be about the story. i was fortunate enough to see kathyrn bigelow as she presented her film here in portland early last summer & i repost that entry for you here ...

remember: media monarchy keeps you ahead of the curve!

and yes, i'm aware of the criticism: hurt locker: part of a deplorable trend?

director kathryn bigelow in portland to discuss 'the hurt locker'

as a benefit for pow fest, the portland oregon women's film festival, ms. bigelow introduced her film to an enthusiastic crowd. after the film, the oregonian's kristi turnquist served as interviewer & moderator for questions from the audience which covered everything from the technical aspects of the film to a personal account from a woman whose husband is a gulf war veteran that couldn't bring himself to see this gritty & hard-hitting film. 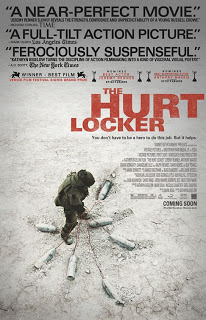 from washington post: "War is a drug," writes Christopher Hedges in the epigraph that precedes "The Hurt Locker." Someone else described war as "interminable boredom punctuated by moments of stark terror." Director Kathryn Bigelow comprehends both those observations and conveys them in this captivating, completely immersive action thriller. "The Hurt Locker" just happens to be set in Iraq in 2004, but, like the best films, transcends time and place, and in the process attains something universal and enduring. "The Hurt Locker" is about Iraq in the same way that "Paths of Glory" was about World War I or "Full Metal Jacket" was about Vietnam - which is to say, utterly and not at all. "The Hurt Locker" is a great movie, period.