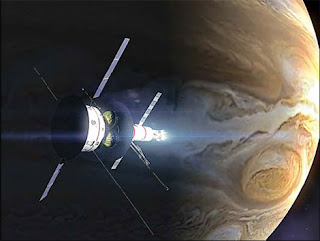 Why not spend your free time designing interstellar spacecraft? Andreas Tziolas, director of Project Icarus, believes your hobby could help us get to the next star. DARPA plans to award "some organization roughly $500,000 in seed money to begin studying what it would take - organizationally, technically, sociologically and ethically - to send humans to another star, a challenge of such magnitude that the study alone could take a hundred years," according to the article, "Next stop Alpha Centauri," at CHINADAILY.com.cn .

"The awarding of that grant, on November 11 - 11/11/11 - is planned as the culmination of a yearlong Darpa-NASA effort called the 100-Year Starship Study, which will include a three-day public symposium in Orlando, Florida, starting on September 30 on the why's and how's of interstellar travel." The present writer would only ask readers why award grant on Nov. 11, 2011? This can't be worshipful occult number significance - only a coincidence!