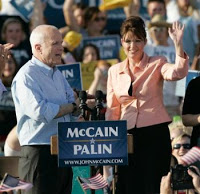 the day before the rnc: storms, plans, raids & schemes

from thinkprogress: Politico reports that the impending landfall of Hurricane Gustav has forced Republicans to scramble their convention plans. President Bush may not attend at all, and John McCain may deliver his acceptance speech from the hurricane-stricken areas... McCain was scheduled to deliver his acceptance speech Thursday but now may do so from the devastation zone if the storm hits the U.S. coast with the ferocity feared by forecasters. “It just wouldn’t be appropriate to have a festive occasion while a near-tragedy or a terrible challenge is presented in the form of a natural disaster,” McCain said in a taped interview for Fox News Sunday.

gop considered delaying convention
from washington post: Republican officials said [Thursday] that they are considering delaying the start of the GOP convention in Minneapolis-St. Paul because of Tropical Storm Gustav, which is on track to hit the Gulf Coast, and possibly New Orleans, as a full-force hurricane early next week.

from salon: Protesters here in Minneapolis have been targeted by a series of highly intimidating, sweeping police raids across the city, involving teams of 25-30 officers in riot gear, with semi-automatic weapons drawn, entering homes of those suspected of planning protests, handcuffing and forcing them to lay on the floor, while law enforcement officers searched the homes, seizing computers, journals, and political pamphlets. Last night, members of the St. Paul police department and the Ramsey County sheriff's department handcuffed, photographed and detained dozens of people meeting at a public venue to plan a demonstration, charging them with no crime other than" fire code violations," and early this morning, the Sheriff's department sent teams of officers into at least four Minneapolis area homes where suspected protesters were staying.