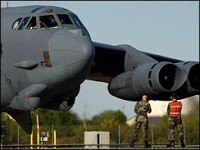 from ap: The Air Force says at least three ballistic missile crew members at bases in North Dakota and Montana have been taken off the job while the military investigates allegations ranging from sexual abuse to missing classified components used in underground launch control centers. The Air Force announced Thursday that an officer who earlier worked at Minot Air Force Base’s 91st Space Wing notified the military in May that he and another officer had lied about destroying classified launch components in July 2005. “They were supposed to destroy them and they signed documents saying they destroyed them,” said Maj. Laurie A. Arellano, an Air Force spokeswoman. Instead, she said, “they took them home.”