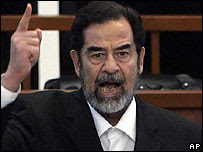 The court rejected an appeal by Saddam Hussein's lawyers and confirmed that he would be hanged, court spokesman Raed Juhi told the BBC.

The appeal was launched after an Iraqi court sentenced Saddam Hussein to death on 5 November for the 1982 killings of 148 Shias in the town Dujail.

Under Iraqi law, Saddam Hussein must be executed within 30 days.

"It cannot exceed 30 days. As from tomorrow [Wednesday] the sentence could be carried out at any time," appeals court judge Arif Shaheen told a news conference in Baghdad.