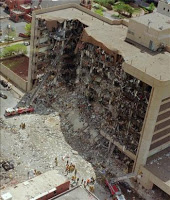 from guardian: A two-year congressional inquiry into the Oklahoma City bombing concludes that the FBI didn't fully investigate whether other suspects may have helped Timothy McVeigh and Terry Nichols with the deadly 1995 attack, allowing questions to linger a decade later.

The House International Relations investigative subcommittee will release the findings of its two-year review as early as Wednesday, declaring there is no conclusive evidence of a foreign connection to the attack, but that far too many unanswered questions remain.

The subcommittee's report will conclude there is no doubt McVeigh and Nichols were the main perpetrators, and it discloses for the first time that Nichols confirmed to House investigators he participated in the robbery of an Arkansas gun dealer that provided the proceeds for the attack.

There have long been questions about that robbery because the FBI concluded McVeigh was in another state at the time it occurred.

The report also sharply criticizes the FBI for failing to be curious enough to pursue credible information that foreign or U.S. citizens may have had contact with Nichols or McVeigh and could have assisted their plot.

"We did our best with limited resources, and I think we moved the understanding of this issue forward a couple of notches even though important questions remain unanswered," Rep. Dana Rohrabacher, R-Calif., the subcommittee chairman, said in an interview with The Associated Press.

Rohrabacher's subcommittee saved its sharpest words for the Justice Department, saying officials there exhibited a mindset of thwarting congressional oversight and did not assist the investigation fully.

The report rebukes the FBI for not fully pursuing leads suggesting other suspects may have provided support to McVeigh and Nichols before their truck bomb killed 168 people in the main federal building in Oklahoma City on April 19, 1995.

The report says the inadequacy of the bureau's work was exposed two years ago when some bombing evidence overlooked for 10 years was discovered in a home linked to Nichols that had been searched repeatedly by agents.

It also notes that McVeigh failed a polygraph when he was asked a question about whether other perpetrators were involved.

FBI spokesman Richard Kolko said Sunday the FBI had not seen the report but that it remains confident its agents conducted a thorough invetsigation.

"The Oklahoma City bombing case was the largest case the FBI worked on before 9/11," Kolko said. "Agents at virtually every office, domestically and overseas, covered thousands of leads. Every bit of information was investigated and reviewed."

The subcommittee report concludes the Justice Department should not have rushed to execute McVeigh in 2001 after he dropped his court appeals, and officials should have made more efforts to interview and question him about evidence suggesting he might have gotten help from other people who remain unpunished.

*Witness accounts that another man was seen with McVeigh around the time of the bombing. The FBI originally looked for another suspect it named John Doe 2, even providing a sketch, but abruptly dropped that line of inquiry. The subcommittee concludes that decision was a mistake.

*Findings in AP articles in 2003 and 2004 that indicated the FBI had gathered some evidence suggesting a group of neo-Nazi bank robbers may have been tied to McVeigh. The subcommittee interviewed three of those robbers, and all denied a connection. A fourth member of the gang died and a fifth member could not be located by Congress.

*Phone record and witness testimony that persons associated with Middle Eastern terrorism in the Philippines may have had contact with Nichols, and that Nichols took a book about explosives to the Philippines. The FBI and Filipino police spent months investigating such a connection, but ruled it out.

*Information from a former TV reporter concerning an Iraqi national who was in Oklahoma around the time of the bombing.