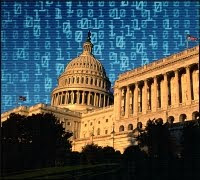 from the atlantic: At the beginning of the year, the chances that some sort of cybersecurity legislation would reach the president's desk by the end of 2010 were remote. But as of today, there are a half dozen such bills circulating, and the sense of urgency is there, thanks to a huge and largely unremarked upon public lobbying campaign by the defense industry that may or may not comport with the actual level of threat. I don't mean that as a snide aside; I just don't know how vulnerable we are at this moment.

Today, the Senate Homeland Security and Government Affairs Committee unveils its legislation, which would create a Senate-confirmable cyber director in the executive office of the president and imbue him or her with significant emergency powers.

The Protecting Cyberspace as a National Asset Act of 2010 (PC-NNA ... PC Nana?) is "designed to bring together the disjointed efforts of multiple federal agencies and departments to prevent cyber theft, intrusions, and attacks across the federal government and the private sector," its chief author, Sen. Joe Lieberman, will say in prepared remarks today. "The bill would establish a clear organizational structure to lead federal efforts in safeguarding cyber networks. And it would build a public/private partnership to increase the preparedness and resiliency of those private critical infrastructure cyber networks upon which our way of life depends."

The bill would create another Senate-confirmable position, the head of a new National Cybersecurity and Communications Center inside the Department of Homeland Security; the new NCCC would be responsible for threat prevention and mitigation. It would develop risk-based standards for infrastructure with industry and oversee their implementation. Private entities whose power plants or grids or systems are considered vulnerable and critical could choose among a menu of standards.

According to a summary of the legislation, the Act would also create a "responsible" framework for giving the executive branch significant emergency power in the event of a major intrusion or threat.

Industry will read this part of the bill very carefully, as will civil libertarians. The White House believes it already has a lot of these powers, although it welcomes Congress's attempt to codify them, but my sense is that the National Security Staff does not want to create any new cyber infrastructure within the already over-burdened executive office of the president, and isn't keen on having the top two cyber positions be Senate confirmable.

Updates: Internet 'kill switch' proposed for US*
Lawmakers question US cybersecurity readiness*
Experts warn of government's inability to respond to cyber threats*
Pentagon launches salvo in war to protect an army of 7M*
Cybersecurity bill would give president, DHS too much power, critics say*
Cybersecurity not a 'command & control' effort*