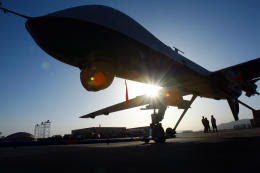 Are Drones Coming to US Skies?

FAA under pressure to open US skies to drones

from allgov: It likely is just a matter of time before unmanned aircraft, including the type being used in Iraq, Afghanistan and Pakistan, are flying over America’s friendly skies. State and federal officials, especially the Department of Homeland Security, are pressuring the Federal Aviation Administration (FAA) to allow pilotless planes of all sizes to move through U.S. airspace in order to carry out a variety of missions.

Border patrol operations already are using Predators to help monitor areas near Mexico, and homeland security officials want to expand this use to guard the border with Canada and spot drug smugglers off American coastlines. The ability of the pilotless aircraft to fly up to 20 hours at a time makes them attractive to law enforcement.

Other proponents of drones include tornado researchers who want to send them into storms to gather data; energy companies seeking to monitor pipelines; and police pursuing suspects in cars.

The FAA has been at work since 2006 on plans to allow unmanned aircraft to fly over the U.S. Officials in the Department of Defense have accused FAA officials of dragging their feet, but the agency insists it’s erring on the side of safety.

“I think industry and some of the operators are frustrated that we’re not moving fast enough, but safety is first,” Hank Krakowski, FAA’s head of air traffic operations, told the Associated Press. “This isn’t Afghanistan. This isn’t Iraq. This is a part of the world that has a lot of light airplanes flying around, a lot of business jets.”