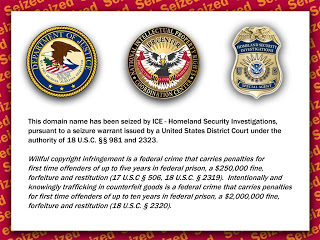 DHS/ICE Start Another Round of ‘Pirate’ Domain Seizures 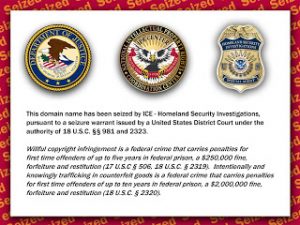 from torrent freak: US authorities have resumed “Operation In Our Sites” and have seized several domain names associated with copyright infringement or counterfeit related crimes. Among the new targets are two sites that linked to copyrighted films hosted on third party streaming sites such as megavideo.com and veoh.com. Homeland Security’s Immigration and Customs Enforcement (ICE) has yet to officially announce the new operation.

Over the past several months a series of domain name seizures by the Department of Justice (DOJ) and Immigration and Customs Enforcement (ICE) made headlines across the Internet.

Under the flag of “Operation In Our Sites” the authorities shut down a dozen file-sharing and streaming sites and many more accused of selling counterfeit goods.

Today ICE continued the operation with a 4th round, and the first one since February this year. Although the authorities are yet to give an official comment on the new seizures, TorrentFreak was able to confirm the following targets:

The first two domains are accused of copyright-related offenses, but did not host any copyrighted films themselves. Both Re1ease.net and Watchnewfilms.com linked to popular movie streaming sites such as Veoh.com and Megavideo.com. The rest of the domains appear to be connected to sales of counterfeit goods.

The new targets were most likely put forward to ICE by movie industry groups. In April of this year ICE director John Morton admitted that his organization was acting based on “tips from industry representatives,” among others.

The authorities are also aware of the fact that the domain seizures themselves are not really an effective tool. As pointed out before, more than half of the piracy-related domains that were seized by Operation In Our Sites simply continued under a different name.

Morton replied to this critique by emphasizing that the seizures also act as “public education about pirating.”