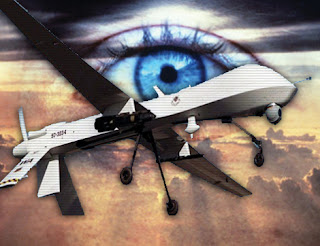 It’s in your face fascism!  Department of Homeland Security  (DHS), according to Trevor Timm at Activist Post, “…signed a contract that could be worth as much as $443 million with General Atomics for the purchase up to fourteen additional Predator drones to fly near the border of Mexico and Canada. Congress would still need to appropriate the funds, but if they did, DHS’ drone fleet would increase to twenty-four.” A public relations blitz, will likely, attempt to mollify public concern over privacy and safety, but blog entry adds:

“Perhaps worse, DHS is also flying Predator drone missions on behalf of a diverse group of local, state, and federal law enforcement agencies for missions beyond immigration issues. We know they have lent the drones out to the county sheriff’s department in North Dakota and the Texas Rangers, among others, but unfortunately, we don’t know the full extent DHS lending program. DHS, as is their custom, is keeping that information secret.”

Timm  summarizes “spies in the skies” capabilities: “…..drones can be equipped with, among other capabilities, facial recognition technology, fake cell phone towers to intercept phone calls, texts and GPS locations, and in a few years, will even be able to see through walls.” You will have much more to worry about than a speeding ticket, when Predator drones fill US skies!

One response to “DHS Wants To Double US Predator Drone Fleet”