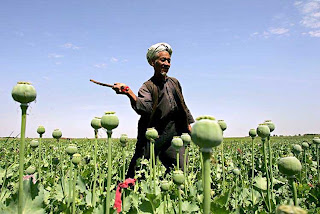 from nytimes.com: Opium poppy cultivation rose substantially in 2012 in an “alarming” trend, despite a major opium eradication effort by Afghan governors, United Nations officials said Tuesday as they released the organization’s 2012 opium survey, which was undertaken with the Afghan Ministry of Counternarcotics.

The higher cultivation levels were driven by high prices for the crop as well as instability in the main growing areas, which made it easier for farmers and traffickers to operate. Another factor was the lack of a governmentwide commitment to counternarcotics, said Jean-Luc Lemahieu, the chief of the United Nations Office on Drugs and Crime for Afghanistan.

Poppy cultivation nationwide increased by 18 percent between 2011 and 2012, with a similar increase in Helmand Province, the biggest opium-producing region, despite an aggressive campaign by the governor to eradicate the crop and promote alternative jobs.

Afghanistan is the world’s largest producer of opium, the raw material for heroin, with its farmers harvesting about 80 percent of the world supply. Large quantities of Afghan heroin are exported to Russia, Iran and Europe.

While cultivation rose, the actual production of opium dropped by about a third in 2012 compared with 2011 because of a plant blight that reduced its yield. Counternarcotics experts watch both production and cultivation levels, but cultivation is of particular importance because it is an indicator of farmers’ intentions. As long as Afghan farmers remain committed to trying to grow poppy, Afghanistan will remain a major producing country, United Nations officials said.

“We think it’s alarming, but we are not panicking, because now it is up to us to tell the government what needs to be done to correct the situation,” Mr. Lemahieu said, adding that it will be a very long road. “It will take one decade, two decades.”

The Afghan government has been seen as ambivalent about a wholesale assault on opium cultivation and trafficking for several reasons. One is that high-production areas tend to be among the least secure, making it dangerous for the police and the army to take on well-armed traffickers. But widespread corruption also plays a role, with officials at every level seduced by opium profits and loath to disrupt the patronage networks that could deliver them.

Undercutting the government’s best efforts are the Taliban and other insurgent groups, who tax the crop in areas they control. The Afghan counternarcotics minister, Zarar Ahmad Muqbil, estimated that the Taliban made at least $155 million from the poppy crop in 2012, and perhaps considerably more.