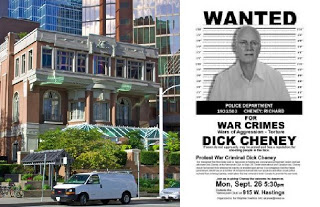 Dick Cheney will speak at notorious child-trafficking Vancouver Club, on Monday, according to recent Intel Club article. Cheney will make case he's not a war criminal and followed the law, when he presents his recent memoir at a 5:30p event. In a 2008 article, "When Pedophile Judges Fear Exposure," Henry Makow writes about a particularly nasty incident in Club's past. Allegations surfaced Indian children were seen entering at the back of the Club on 915 West Hastings in downtown Vancouver, BC, never to be seen or heard from, again. Lawyers presenting their child-trafficking cases were drugged and thrown in local mental wards. Cheney doesn't worry what the public thinks, as he's stated in the past, but photographers should seek out the back entrance to get their photo op.

Vancouver lawyer Gail Davidson will seek Dick Cheney's arrest, reports a Straight.com article. We Are Change Vancouver, with best take, is organizing a protest of Cheney's visit to Canada. How do these elite pedophile scumbags get away with it?