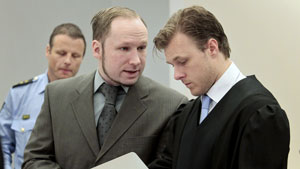 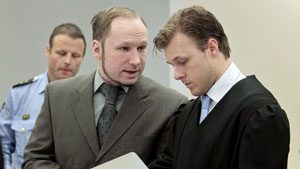 You've already been deceived to consider title seriously, "Did Anders Behring Breivik Really Act Alone?" The psychological operation enjoys a measure of success if you're honestly weighing the question! Brit Dee reports in article on incongruous denials by authorities of any evidence involving co-conspirators: "Speaking at Breivik's trial in Oslo, police officers testified that they had found no evidence of a wider network, and that they did not expect to find any in future. Despite Breivik's insistence that he was in contact with at least six other radicals, including two one-man cells in Norway, Oslo police chief Kenneth Wilberg stated that he felt sure there were no such contacts, and Alf Nissen of the Norwegian criminal police confirmed that no such accomplices had been identified."

Dee adds more evidence of involvement by others: "Breivik has consistently referred to a founding meeting of the Knights Templar in London in 2002, attended by three other militants, including a man described as his "mentor" and who he calls "Richard The Lionhearted". A cafe credit card receipt proves he was indeed in London at the time. Stamps in his passport prove that he was in Liberia in Spring 2002, where he says he met a Serbian nationalist. The Serb, "wanted for war crimes", is another contact who police have dismissed as non-existent."

It's likely Anders Behring Breivik didn't act alone! The present writer believes Dee is closer to the truth when she offers: "an alternative theory may be that the dissonance we have seen today represents a deliberate "strategy of tension" reminiscent of that used during Europe's long-running Operation Gladio; a calculated attempt to foster paranoia and fear amongst the population, which can then be exploited to advance the personal agendas of those manipulating events from behind the scenes."

It seems almost axiomatic: "the more bizarre a tale - greater is the likelihood of backing by a state." The Norway incident is bizarre. Red Ice Radio interviewed Brit Dee and Tom Secker from Resistradio.com recently: hour 1, hour 2. Host Henrik Palmgren finds case puzzling, but politely disagree with him the case is blatantly obvious! Secker takes aim at direction investigation should be going if it weren't a sham by seeking out mysterious mentor, Richard The Lionhearted. The Knight's Templar 2083 manifesto supposedly composed by Breivik and short companion movie, seem a ready made press kit. Alex Jones and Webster Tarpley discussed Norway incident shortly after it occurred, last year, and declare it state sponsored terror! Don't fall for the lone gunman drill!