Did Germans Launch Manned Rocket in 1933? 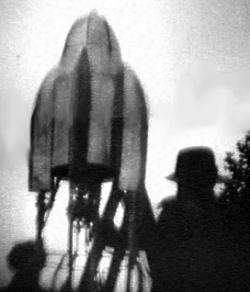 Was Otto Fischer, brother to German  rocket designer Bruno Fischer, first to man a rocket?  An article at io9.com relates, "on October 29, 1933, the London Sunday Referee published a
report from Rugen, an island in the Baltic Sea, just off the coast of
Germany. Someone named Otto Fischer had flown inside a 24-foot steel
rocket, to an altitude of six miles," a group of Reichwehr (War Ministry) officials present to witness  launch. The story has twist in money provided for project, was intended, to help prove Hollow Earth Theory.  A rocket flying in a straight line should reach New Zealand, believed to be on opposite side of a Hollow Earth.  "This was the Hohlweltlehre, or Hollow Earth Doctrine, of Peter Bender that flourished in the anticultural Nazi movement...," reports article.  A plausible story given  "...the Germans were in
fact hotly pursuing rocket propulsion at the time. Added to this was the
fact that Bruno Fischer really existed and was busily at work designing
rockets. And in fact, the report caused a considerable fuss at the time
it appeared."

Willie Ley, a German-born space expert, believes story got distorted beyond recognition.  Pioneer rocket researcher Rudolf Nebel, chief engineer for the Verein fur Raumschiffahrt (German Rocket Society), given the project, coined it the "Magdeburg Pilot Rocket".  It's believed, a reporter misunderstood name and ran with story. The article concludes with ironic quote from Nebel:  "the first manned flight rocket [sic] will introduce a development
which has rapid transport over the earth as its final goal. I admit that
many people still laugh at such plans." Nobody should be laughing, now.  It's an interesting read even if likely little more than wartime German disinformation!