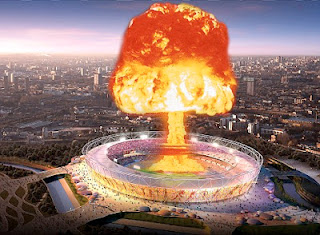 Is the short story that appeared in a 2010 Mail Online edition, "Olympic Armageddon," a case of predictive programming? Is the fictional thriller by "Tom Cain" AKA David Thomas serving same purpose as "The Final Jihad" by Martin Keating? The work of fiction by Keating tells story of main character Tom McVeigh, who masterminds bombing of Oklahoma City Federal building. Martin Keating is the brother of Frank Keating, who was governor at time of 1995 bombing. Is it too close for comfort? The present writer suspects stories are acts of absolution of care, inspired by covenants held by members of secret societies. Cain appears an Illuminati choice for pen name. The story theme has Al Qaeda seeking a propaganda coup. A speedboat with a dirty nuke on-board cruises at high speed up the river Thames in attempt to reach its destination: Olympic stadium. The terrorists attempt to set off bomb once there with estimated casualties of 13,000 - an Illuminati favorite number: 13. Will there be a bombing at 2012 London Olympics? Is short story getting you familiar with your future?

You may also view a great video that seems to strongly indicate that tragedy is planned for 2012 Olympics!