Since 2005, Media Monarchy has covered the real news about politics, health, technology and the occult - all remixed with music and media that matters.
Home > #HolyHexes, #Monarchives

This post was spotted through ZenGardner.com, and it's a thought provoking article about how elite child abuse was possibly insinuated in a popular poem by English poet William Blake. It was additionally featured on BeforeItsNews. 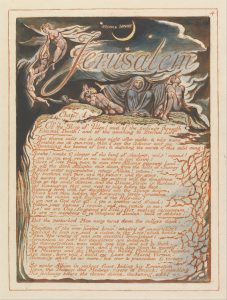 PoetryFoundation.org detailed some of Blake's past:

By all accounts Blake had a pleasant and peaceful childhood, made even more pleasant by his skipping any formal schooling. As a young boy he wandered the streets of London and could easily escape to the surrounding countryside. Even at an early age, however, his unique mental powers would prove disquieting. According to Gilchrist, on one ramble he was startled to "see a tree filled with angels, bright angelic wings bespangling every bough like stars." His parents were not amused at such a story, and only his mother's pleadings prevented him from receiving a beating.

And from Schmoop.com, an attempted explanation of the poem "Jerusalem":

"Jerusalem," best known nowadays as a popular British hymn, and England's unofficial national anthem. If Milton is about the second coming of John Milton, "Jerusalem" is about the re-establishment of, well, Jerusalem. You could say the poem is about the second coming of the city that for Blake symbolizes holiness, peace, perfection, etc. The poem is perfect as part of a preface because its themes foreshadow the larger themes that Blake explores at great length in Milton.

Now, before we let you go, we have to cover a few other small things. First, when Blake talks about Jerusalem, he doesn't mean the city in Israel in its modern form. No, no. For Blake, Jerusalem is always the New Jerusalem described in Chapter 21 of the Book of Revelation, a beautiful golden city that will descend from the sky at the end of time and serve as the eternal home for God and all his true followers. The New Jerusalem in Blake's poetry is what results when all the divisions and fractures of the world are finally healed and the world is made whole again.

It is the State’s compulsion to twist and diminish, to reverse and perverse anything true and anything pure, that partly explains the perversities committed against children that are only now coming to light. For these people associate Power, in its ‘purest’ form, with the corruption of any organic truth or purity. Eventually, the physical corruption of children becomes a natural extension of their self-serving perversity, perhaps even the ultimate prize.

Blake himself was enraged by the State’s wanton abuse of children; the child to him was a Holy Lamb; and he recognised that the church and state whose moral duty it was to protect these children were in fact the oppressors and exploiters of the holy lamb.

It is worth the read.