did u go digital last nite? u should open yr converter box 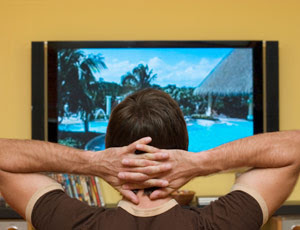 from afp: More than 600 US television stations will transmit digitally only on Wednesday after cutting off their analog broadcast signal overnight as part of a nationwide switch. The Federal Communications Commission (FCC) said a total of 421 television stations planned to end their analog broadcasts at midnight Tuesday (0500 GMT Wednesday), joining 220 stations that have already made the switch. US President Barack Obama signed a bill last week delaying the nationwide shift to digital television until June, but some stations were given the green light by the FCC to make the shift on the original February 17 date. The FCC said 641 stations – or 36 percent of the nearly 1,800 full-power television stations in the United States – will have ended analog broadcasts by Wednesday. Major TV networks, such as ABC, CBS, Fox and NBC, are not among those planning to cut off their analog broadcasts overnight. February 17 was the date set by the George W. Bush administration for an end to analog broadcasts by television stations, but Congress voted to extend the date until June 12. The government has been providing Americans who rely on over-the-air signals with a 40-dollar coupon to defray the cost of buying a digital converter box. But the coupon program has run out of funds and, according to research firm Nielsen Co., more than 6.5 million American households are not prepared for the switch. Many of the unprepared are low-income households, minorities, seniors or disabled, according to Nielsen. The switch to digital television will free up wireless airwaves for public safety agencies and other advanced mobile services.

camera & mic in magnavox digital conversion box
from mechanism studios: I have a friend who is kind of a conspiracy theorist. He was trying to convince me that many of the digital TV converter boxes that our coming out have microphones and cameras built into them. Knowing a bit about electronics I bought one of these devices & opened it up, fully intending on proving him wrong. To my surprise, he was right. This device has both a miniature camera lens and what looks like a microphone.

One response to “did u go digital last nite? u should open yr converter box”